Short Ending:
Angel is fatally shot in the gunfight at Church. Percival shoots Trumpy in order to save Rooster. Rooster turns his life around, patches things up with his family, and starts a music label that elevates Percival (who has overcome his stage fright) to star status

Long Ending:
This is a musical starring and featuring the music of the band Outkast. In the opening (which is literally over 10 minutes of narration), Percival Jenkins (André “Andre 3000” Benjamin) describes his childhood. He grew up the son of the mortician in a town called Idlewild. His father trains him to take up the family business while tolerating Percival’s talent for the piano. As a boy, Percival befriends a rowdy young con-artist named Rooster (Antwan “Big Boi” Patton). Rooster is essentially raised by his Uncle Spats (Ving Rhames), the local mob boss.

In adulthood, Pecival works days as a mortician and nights as a piano player for the local speakeasy called “Church.” Though he is a very talented piano player and lyricist, he suffers from debilitating stage-fright. Rooster is the star of the nightly shows. He has a family with many children, but largely neglects them in favor of singing at Church. He continues to be involved in his Uncle’s schemes and is also having affairs on his wife.

One night, Spats strikes a deal to sell his business (which primarily consists of bootlegging) to Sunshine Ace (Faizon Love), the owner of Church. Before the deal is consummated, Spats and Ace are murdered by Spats’ second in command, a man named Trumpy (Terrance Howard). Rooster is forced to assume management of Church and Trumpy takes over the moonshining business and inflates the cost of alcohol. Rooster is barely able to keep Church afloat due to Trumpy’s spiking of alcohol prices. Rooster’s family soon leaves him due to his neglect.

Meanwhile, Percival befriends a new singer who has arrived in town to perform at Church. Her name is Angel Davenport (Paula Patton, singing voice dubbed by Debra Killings) and while talented, she lacks confidence and is constantly taunted by the club’s other singers (cameo by Macy Gray). Percival begins writing songs for her and the pair soon overcome their respective stage fright and kindle a romantic relationship.

Things turn around at Church due to Angel’s  success singing Percival’s songs and Rooster’s ability to circumvent Trumpy by buying alcohol from a competitor. It is revealed that Angel is not who she claims to be, but stole the identity of a far more accomplished singer of the same name (cameo by Patti LaBelle). Percival doesn’t care and the pair agree to run away together after her final show that night.

Rooster has a religious experience and decides to turn his life around. Before he can, he discovers that Trumpy has killed the moonshiner Rooster was buying alcohol from and is out to kill Rooster too. Trumpy tracks Rooster to Church and a gunfight breaks out. Trumpy is about to kill Rooster when Percival manages to fatally shoot Trumpy and save Rooster’s life. Unfortunately, they discover that Angel was shot during the gunfight and she dies in Percival’s arms. Nonetheless, she gave him the confidence to seek the fame and fortune he was always destined for.

The film ends with Rooster as the owner of a legitimate business – a record label. The label’s hit artist is Percival. Rooster now lives with his family and is now a good father and husband. 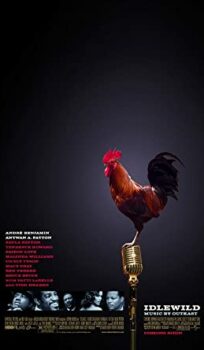