I’ll Always Know What You Did Last Summer(2006)

A group of teens hear about the “legend” as they call him in this sequel and play a cruel prank but the prank goes wrong and one of them ends up dying!

A year later on July 4th the “legend” shows up because he doesn’t like it when people keep secrets. Most of them end up dying but the killer himself is wasted in farm equipment near the end.

One year later he comes back and finally kills the last one in the group and the show is over! 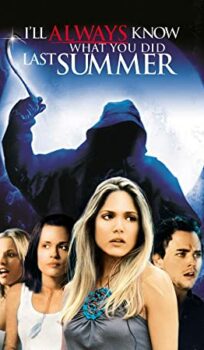