Ray is suicidally depressed over the accidental murder of a little boy on his first hit.  Ken, despite being ordered by Harry to kill him, prevents Ray from shooting himself.  Ken puts him on the first train out of Bruges, believing in his ability to start over and live a better life.  Ken calls Harry, reporting what he has done and that Harry knows were to find him to settle the score.

Ray gets arrested by the local police for punching out two Canadian tourists on his dinner date with Chloe, who bails him out of jail.  Harry and Ken go up to the bell tower, and, out of longtime respect, Harry shoots Ken in the foot rather than kill him.  Chloe’s ex-boyfriend reports that Ray is back in Bruges and Harry can finish business himself.  Ken is mortally wounded trying to stop Harry and he throws himself off the bell tower to allow Ray time to escape.

Harry follows Ray back to the hotel, and despite having jumped aboard a canal boat, Ray is shot in the back.  He manages to get to the film set.  After being shot several more times, Ray falls next to the body of Jimmy, who’s head has literally been shot away.  He is dressed in a school uniforn so Harry thinks he has killed a child, and sticking to his own principals, he kills himself.

Ray is carted into an ambulance and he reflects on how much he wanted to visit the mother of the child he killed and accept whatever punishment she bestowed.  He also thinks how hell would be like being stuck in Bruges for all eternity.  Before he looses consciousness, he realizes that he doesn’t want to die anymore. 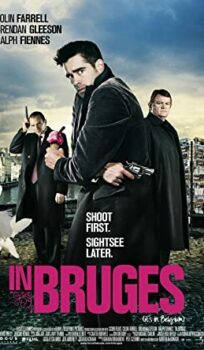