Loosely based on the infamous, brutal murder of three of the Mirabal Sisters, staunch opposers to the bloody Dictatorship of Dominican President Rafael L. Trujillo.

The movie, which has played “in medias res” -starting at a specific later event, then going back to an earlier event and moving again forward to where it started.

Minerva (Salma Hayek) still languishing in prison, but having become an inspiring symbol of the growing opposition to the Dictatorship of Trujillo (Edward James Olmos). For their collective efforts, she and her two other imprisoned sisters, Patria (Lumi Cavazos) and Maria Teresa “Mate” (Mia Maestro) have all come to be known as “The Butterflies” -this was akin to the nickname MARIPOSA (Butterfly) that an earlier love interest, Lio (Marc Anthony) had given Minerva, years prior-. There was a fourth younger sister, Dedé (Pilar Padilla), but she was more in the background and not nearly as politically active as the other three.

Eventually, the three women are released from prison, although their husbands are deliberately held captive, which bolsters their efforts to have them freed as well. In what appears to be a token of good faith, Trujillo pays a personal visit to Minerva -it is to be noted that the great grief he caused the entire Mirabal family was due to the fact that he, a notorious womanizer, always wanted Minerva for himself, but she flatly refused and rebuked him-; the meeting is filled with tension and Minerva, although still firm about not wanting to have anything to do with the tyrant, pleads once more for the release of her husband Manolo (Demian Bichir), as well as her brothers-in-law. Trujillo, barely hiding his contempt for her but feigning compassion, vows that he will soon “help her end all the family’s troubles”.

In one instance that the sisters, along with their driver Rufino (Jesus Lorenzana), are returning from a trip to prison to visit their husbands. They are pulled over by a group of men and forced off their vehicle and deep into the surrounding fields. Seeing they are all brandishing weapons, Minerva realizes they have been sent by Trujillo and unsuccessfully tries to talk them off; convinced of their doom, the sisters embrace and pray together as the men mercilessly beat them to death.

The movie ends with title cards stating that the assassination of the Mirabal Sisters -whose date, November 25, would go on to be internationally recognized in a great deal of the world as the Day Against Violence Towards Women- proved to be the coup de grace for the already troubled regime of Trujillo, who was assassinated six months later in a plot; and that many of their children, in adulthood, became public office figures in the latter Democratically elected governments of the Dominican Republic. 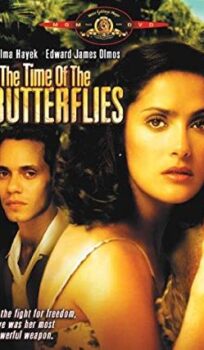