Pooper:
Violet, Dash, and Jack-Jack free the other heroes from Evelyn’s control and the heroes save the day and capture Evelyn. The world maintains its support for the supers and the ban on superheroes is lifted worldwide. The Parrs continue to fight crime (now out in the open) while also balancing their family life.

Long Ending:
Taking place immediately after the first film ends, the Underminer (voiced by John Ratzenberger) launches an attack on the City. The Parr family – Bob/Mr. Incredible (Craig T. Nelson), Helen/Elastigirl (Holly Hunter), Dashiel/Dash (Huckleberry Milner), and Violet/no superhero name (Sarah Vowell) – leap into action while also trying to watch their young baby Jack-Jack (Eli Fucile). With an assist from Lucius Best/Frozone (Samuel L. Jackson), the heroes manage to save lives and eventually stop Underminer’s machine. But Underminer gets away, and the City sustains significant damage resulting from the battle. Being a superhero is still illegal and the public are infuriated that the heroes “caused” so much damage. During the fight, Tony (Michael Bird) learns that Violet is a superhero and the government erases his memory of her.

After the battle, Frozone, Mr. Incredible, and Elastigirl are contacted by Winston (Bob Odenkirk) and Evelyn Deavor (Catherine Keener), who own a gigantic telecommunications company. William is a marketing genius and Evelyn is a tech wizard. Their parents (who were friendly with many superheroes) were killed by armed robbers after the superheroes were banned and were unable to arrive when their dad called them for help. The pair, and in particular Winston, want to lift the law banning superheroes. They believe that the issue with superheroes is poor marketing (i.e., people only see the aftermath, not the battles and the heroics). They want to fit superheroes with mini cameras so people can livestream their heroics firsthand. And they believe Elastigirl is the perfect hero to help sway the public towards permitting superheroics (in addition to her status as a legend, she also typically causes less damage than the males).

Helen accepts the job. The Deavors put up the Parrs in a palatial estate where Bob will watch the kids while Elastigirl engages in heroics.

Bob, at first, is not great at parenting. Violet is angry that they erased Tony (her almost-boyfriend’s) memory, he is unable to help Dash with his homework, and Jack-Jack suddenly exhibits an array of powers (over 17 by movie’s end). Due to the stress (and his jealousy of Helen getting to engage in heroics), he stops sleeping.

Meanwhile, Helen sets out to defeat a villain called Screenslaver, who can hypnotize people into doing his bidding by sending a series of lights across any screen in the world. With the Deavors’ camera broadcasting her every move, Elastigirl defeats Screenslaver on several occasions before eventually capturing him. Her efforts seem to work as the world governments decide to lift the ban on heroics. Bob’s effectiveness as a dad also improves, especially after he enlists Edna (Brad Bird) to build Jack-Jack a costume that can help keep his many powers in check (and finally manages to get a good night’s sleep while Edna is watching Jack-Jack).

World leaders and a cadre of superheroes are going to be in attendance on William’s yacht to sign a treaty lifting the superhero ban. At a party prior to the signing, Helen finally adds up some clues to discover that Evelyn is really Screenslaver (and had hypnotized the man Elastigirl apprehended to do her dirty work). During a confrontation, Evelyn gets the upper hand and slips digital glasses on Elastigirl that hypnotize her. Evelyn explains that she blames superheroes for her parents’ death. Rather than hide from the robbers in their saferoom, they placed their trust in superheroes and paid with their lives. Thus, she wants to make sure superheroes are never heard from again. Using Elastigirl, Evelyn manages to hypnotize Mr. Incredible (and a squad of other hypnotized heroes capture Frozone and bring him under Evelyn’s control). Only the Parr children escape Evelyn’s attack. Rather than flee, they sneak onto William’s ship (William has no idea of his sister’s schemes or secret identity) to rescue the heroes.

After the signing ceremony lifting the superhero ban is completed, the hypnotized heroes claim they want revenge on the public for the ban and will launch an attack on them. The heroes then set William’s yacht on a collision course with a nearby city. After some mishaps, Violet, Dash, and Jack-Jack manage to remove the glasses hypnotizing their parents and the other heroes. Evelyn is abandoned by her brother once he learns of her scheme and she tries to escape in an airplane. Elastigirl pursues and, with the help of some of the fledgling heroes, manages to catch Evelyn (and prevent her from falling to her death). Mr. Incredible, the Parr kids, and Frozone manage to stop the yacht from crashing into the City just in time. Violet (who had the most problems with her dad) tells Mr. Incredible that he is a great dad and did a good job raising them while Elastigirl was fighting crime. Thanks to the Deavor cameras still broadcasting, the public realize the heroes were being controlled and cheer their heroics upon breaking free. The world leaders decide to maintain the treaty lifting the ban on superheroes.

The film ends with the Parr family closer than ever. They are all driving Violet  and Tony (who she won over again) to a date, when they see a car of criminals speed past. Violet has the family drop Tony off at the movie theater to buy their tickets while she and her family race off to save the day. 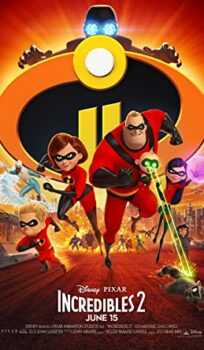