This film , just like Capote, explores the time in the life of celebrated writer Truman Capote (played here by Toby Jones), when he started writing his ultimate work, the non-fiction novel “In Cold Blood”, as well as the time he spent with the murderers, Dick Hickock (Lee Pace) and Perry Smith (Daniel Craig), in order to obtain the information he needed.  However, this plot presents some differences in relation to the other:

*Perry Smith is shown as an aggresive man, resilient to open himself.  He eventually does, and is even told by Truman that there will be a book about them, with the intention of “showing them both as sympathetic human beings, instead of brutal, murderous characters”.

*Truman and Perry share a passionate kiss in one scene, which suggests that there was a level of profound empathy and seemingly amorous connection between them, although Truman knew how to use this for his own advantage.  However, the execution affected him so badly that he is seen rushing off the hanging place, distraught; and, according to semi-documentary interviews to the other characters, it partly influenced the fact that he never completed another book again. 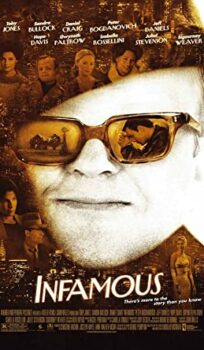