Ingrid Thorburn (Aubrey Plaza), a mentally ill young woman, moves to Los Angeles with her mother’s inheritance money to stalk a social media influencer named Taylor Sloane (Elizabeth Olsen). Ingrid manages to become friends with Taylor, but her obsession is discovered by Taylor’s brother Nicky (Billy Magnussen), who blackmails Ingrid in exchange for not telling Taylor about it.

Taylor eventually finds out what Ingrid has been doing and she cuts her out of her life. Alone and broke, Ingrid uploads a video of herself admitting she’s been living a lie before attempting suicide by overdosing on pills.

Ingrid survives when her friend Dan (O’Shea Jackson Jr.) sees the video and gets her to the hospital. Her video goes viral, with thousands of people showing Ingrid support and giving her the kind of attention she’s been seeking. 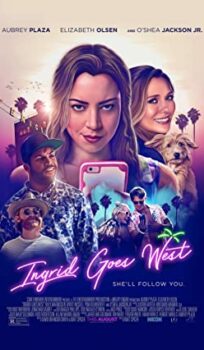