After the death of his mutant child in the first movie, Frank Davis (John P. Ryan) decides to dedicate his life to protecting the mutant babies, under the guise that he is finding more and destroying them for the cops.

He meets a new family Jody and Eugene Scott (Kathleen Lloyd and Fredrick Forrest) who seem to be undergoing the same symptoms as Lenore’s pregnancy. Frank goes to warn the family that the police are after the baby. Eugene doesn’t believe him but Jody does. Frank tells him of a place where the scientists kept two mutant babies alive to study in order to find out what causes the mutations as well as their current behavior.

The police including Perkins (James Dixon) are after Davis and the Scott family. As they make it to the lab Jody goes into labor and the baby is born. It attacks one of the doctors but it is tranquilized and caged before it kills anyone.

The police track them down and the babies are let loose, Jody’s baby surprisingly attacks her, but Frank finds out that it found a tracer in her purse. The cops capture the Scott family and use them as bait, knowing their baby would come for them. The baby does come to them and Eugene like Frank couldn’t bring himself to kill his son. The cops however not wanting to take chances, fumigate the house killing the baby and getting the family away from the house.

A couple years go by and another expecting couple are met by Eugene in the same way Frank met him. 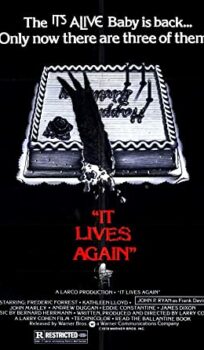