Courtney (Rose McGowan) and Marci (Julie Benz) decide that Vylette’s (Judy Greer) popularity is out of control, so they expose her as Fran Mayo by putting up posters all over school. Julie (Rebecca Gayheart) commiserates with Fran and they decide they have to get even with Courtney. Julie finds the talking birthday card in a box of Liz’s stuff. When she opens it, she hears Courtney’s voice saying “I killed Liz, I killed the teen dream. Deal with it.” She gets her boyfriend to loop it through the sound system at the school and she and Fern sit laughing as it plays over and over while Courtney is being crowned Prom Queen. The student body turns on Courtney and chases her from the prom–presumably to be arrested. 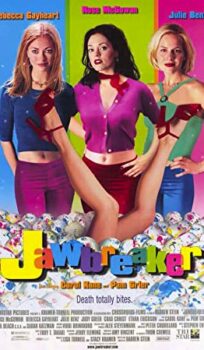