Fun film that brought Cuba Gooding Jr. and the phrase ‘show me the money’ into the limelight.

After super-agent Jerry (Tom Cruise) gets fired from the firm by Bob Sugar (Jay Mohr) and loses all of his star athlete clients except for Arizona Cardinal receiver Rod Tidwell (Cuba), Jerry concentrates on managing only Tidwell. Jerry falls in love and eventually marries single mom Dorothy (Renee’ Zellwegger), who was the only person in the firm to go into business with Jerry. Dorothy has the cutest kid Ray (Jonathan Lipnicki) and together with the Tidwell family and Dorothy’s overprotective sister (Bonnie Hunt), Jerry learns to feel again. Jerry’s career starts to take off again, straining his marriage and all seems lost when Tidwell is knocked unconscious catching a game-winning TD against Dallas. But alas, everything works out well in the end; Tidwell recovers and signs a four-year, $11.2 million dollar contract, announced during an interview with Roy Firestone where Tidwell, like every other guest, cries, and Jerry, Dorothy and Ray live happily ever after. 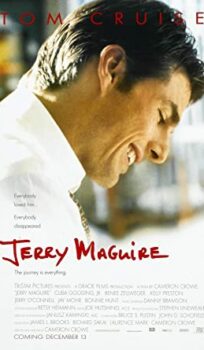