Quick version:
Jessabelle, or “Jessie” (Sarah Snook) is not who she thinks she is. She was adopted into the family to hide the shame after her mother gave birth to a half-black baby, prompting her father to kill the real father and the baby. Her mother committed suicide shortly after that. The ghostly figure that has been stalking her is the real Jessabelle, who wants to take her place in the living world. The real Jessabelle throws Jessie in the river, where she can’t swim, takes the heirloom bracelet from her wrist, and leaves Jessie to drown at the bottom of the river. When she surfaces with the bracelet on, Jessabelle looks just like Jessie and takes her place.

Full version:
Jessabelle, or Jessie, was raised by an aunt after her mother died of cancer when she was a baby. After an accident leaves her in a wheelchair, she ends up at the home of her estranged father, where she keeps having visions of a ghostly figure stalking her. The ghostly figure seems obsessed with a bracelet Jessie wears on her wrist–an old heirloom that is her only possession left from her mother.

Jessie finds video tapes her mother had made for her when she was pregnant. In the first tape, her mother wants to do a Tarot reading for Jessie’s 18th birthday, but all of her predictions (that Jessabelle never left home and stays around the water) seem incorrect. Then the reading takes a turn for the worse, indicating death and destruction, and her mom shuts off the camera.

The second tape reveals that her mother has grown haggard and is concerned for Jessabelle’s safety. She says she spoke to Moses, the man who taught her Tarot, and he advised her to do the reading again. But she gets the same results and becomes agitated, again turning the camera off.

Jessie’s father is furious that she has been watching the tapes and attempts to burn them, only to become mysteriously trapped in the barn and burn himself alive.

Jessie visits with an old high school friend, Preston (Mark Webber) who is now married, and the two discover a headstone across the river from the family property that says “Jessabelle,” claiming that she died the same day she was born. There is an infant skeleton in the coffin buried beneath the headstone.

Preston lets Jessie sleep at his house for the night, then they go back to the house to get her stuff. While there, Preston is knocked unconscious by the ghost and she is left alone while he is taken to the hospital in an ambulance.

The final tape reveals that Jessie is not actually the real Jessabelle. Her mother had been having an affair with Moses, which was revealed when Jessabelle was born half-black. Her father killed Moses and the baby, and adopted Jessie to hide their shame. At the end of the tape, Jessie’s mother commits suicide.

Jessie realizes that the ghostly figure who has been stalking her is the real Jessabelle, and that her mother’s predictions were actually true (on Jessabelle’s 18th birthday she had never left the home and was surrounded by water because she was buried on the water’s edge just across from the house). Jessie also realizes that Jessabelle wants to take her place in the world because she feels it was rightfully hers.

Jessabelle reveals herself and pushes Jessie’s wheelchair out to the dock as Preston arrives with the Sheriff. To them, it appears Jessie wheels herself right over the edge of the dock and into the river.

In the water, Jessie (who never learned to swim and is in a wheelchair, anyway) becomes trapped at the bottom. Jessabelle swims up and takes the heirloom bracelet from Jessie’s wrist. She puts the bracelet on her own wrist and swims to the surface–leaving Jessie to drown. When she surfaces, Jessabelle has taken on Jessie’s appearance, and Preston dives in to pull her out.

Carrying her away from the water’s edge, Preston refers to her as Jessie. Jessie says that her name is actually Jessabelle. 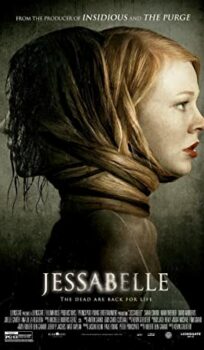