Pooper:
John and David actually live through the end and destroy (or maim) Korrok. Arnie turns out to actually be dead, and can’t tell their story. John and David still possess the power to travel to other dimensions, though they aren’t always particularly helpful to the beings they find there.

Long Ending:
The film starts with a hypothetical. David  Wong (Chase Williamson) recounts a story of beheading a corpse of a man you just killed and that you are now beheading because you are afraid the man may come back. During the beheading, the axe handle breaks and you buy a new handle. Later, you are attacked by a giant leech, and when you chop it, the axe head gets chipped and you buy a new axe head. Later, that corpse comes back, its head sewn back on its body. You brandish the axe and the corpse screams “that’s the axe what killed me.” What do you say? David finishes this vignette by saying the answer could destroy the universe.

We then cut  to David sitting in a restaurant. He is meeting a reporter named Arnie Blondestone (Paul Giamatti). David explains that he is an orphan (who gave himself the last name Wong) whose mother was bi-polar and father unknown. He tells the reporter that he and his best friend John Cheese (Rob Mayes)  have powers that they derived from a drug named Soy Sauce. These powers include limited psychic ability, the ability to see the past and future, and the ability to see alternate dimensions and the creatures that have crossed into our dimension. David and John have used their abilities to help people with their paranormal issues. He recounts a time that he and John encountered a demon made out of meat (like steaks and sausages). They are also friends with a famed paranormal expert named Dr. Albert Marconi (Clancy Brown) , who has an impressive array of magic powers but is considered a fraud by many people.

Arnie is skeptical of David’s story, but David uses some of his talents to pique Arnie’s curiosity (and does this several times throughout the conversation). David then begins his story some time ago, where he is attending a concert where John’s band is playing. He meets a man who goes by the name of “Robert Marley,” who is dealing a drug named Soy Sauce. David also talks to his classmate Amy (Fabianne Therese), who has only one hand due to an accident and has lost her dog, named Bark Lee, at the party. David finds Bark Lee, but Amy has already left. David goes home with Bark Lee and goes to sleep until he is awoken by a call from John. John is freaking out, so David takes Bark Lee and rushes to John’s house where John is screaming due to his high on the drug Soy Sauce. David begins driving John to a hospital when he is accidentally stabbed by the needle and injected with Soy Sauce himself. David is immediately accosted by an extra-dimensional being named Roger North (Doug Jones), who David eventually scares off with a gun.

David and John are subsequently arrested by Detective Appleton (Flynn Turman) and taken into separate interrogation rooms. Detective Appleton begins interrogating David, telling him that all the people who were at that concert are dead except for he and John. Detective Appleton shows David pictures of mutilated bodies found at the house of Robert Marley, where the after-party had taken place. Suddenly, a commotion is heard and Detective Appleton and David are told that John is dead. During the commotion, David receives phone calls from John (ostensibly, John in the future), who helps him escape (and asks if David can steal his body from the police – David can’t). John tells David to head to Robert Marley’s house. David drives over (with Bark Lee in the passenger seat) and finds Marley’s entire stash of Soy Sauce. David begrudgingly takes more of the drug as he needs his powers heightened to figure out what’s going on. Detective Appleton then shows up, saying that when he arrived at this trailer on the night of the murder, Justin White (one of David’s classmates) was acting possessed. Being a devout Catholic, Detective Appleton believes that they are dealing with a demonic presence and wants to burn down the house, with David in it.

Detective Appleton lights the house on fire and traps David inside. David is surprised when Bark Lee drives his truck through the wall, freeing him. It turns out that Bark Lee ate some Soy Sauce, thus giving him powers too. Because David injected more Soy Sauce, he can speak with Bark Lee. Though it is never explained how the dog has such knowledge, Bark Lee tells David that Justin’s body has been inhabited by an entity known as “Shitload” (a bunch of white insect creatures) from another dimension. Shitload possesses people, and when that person is killed, Shitload is released and eats all people around it until it possesses another host (thus explaining what happened to all the people at Marley’s after-party). Bark Lee says that Shitload must be stopped before it destroys the Earth. Soon after, Bark Lee and David are attacked by the possessed Justin.

David awakens in a truck, together with Justin’s other captives – Bark Lee, Amy, another schoolmate named Fred, and John’s corpse. Bark Lee manages to revive John, whose consciousness apparently time-travelled to the future. They arrive at an abandoned mall, in which the party finds a ghost-door leading to other dimensions. Amy is the only one who can open the door (because her amputated stump forms a ghost hand when put in to contact with the ghost door). John, with his knowledge of the future, tricks Jason to go outside where Detective Appleton has arrived to investigate. Detective Appleton kills Jason. Shitload then kills Appleton and possesses Fred. David kills Fred and they manage to burn his corpse with Shitload still inside, thus saving the day.

John then produces weapons and says that he and David must enter the ghost door. Amy opens the door, and Bark Lee follows the heroes inside. There, the duo meet Roger North and Marconi, who have been working together. They explain that David and John have been granted the unique power to cross into other dimensions at will – a power that all other Soy Sauce users lack (telling the kids that the Soy Sauce is a living thing that chose to give them powers). They need David and John to cross into another dimension where an evil biological computer named Korrok has taken over. Korrok is coming close to finding out how to cross into other dimensions, which Korrok then plans to conquer. Marconi gives David and John a bomb that will destroy (or “really mess up”) Korrok and the pair agree to travel to Korrok’s dimension. Bark Lee again follows the heroes.

They arrive at Korrok’s dimension, where their arrival was predicted. They learn that Korrok ingests people and in doing so, gains their knowledge and abilities. Korrok’s followers attempt to feed David and John to Korrok, but are unsuccessful. David attempts to set off the bomb, but the timer breaks. Bark Lee sacrifices himself in order to manually set off the bomb, thus killing/messing up Korrok. Marconi is then found waiting in the hallway to take them home ( it turns out that Marconi can also travel across dimensions, but explains that Korrok would have killed him immediately as a threat whereas David and John were deemed innocuous)

David then explains to Arnie that he is now dating Amy (though she is mad that Bark Lee was killed) and that he and John still fight extra-dimensional evil when they are so motivated. David explains that he needs Arnie to write their story so the world is made aware of the threats facing them and that more people can join their cause. Arnie agrees to write the story, but as they talk, David realizes that Arnie is actually dead (murdered by extra-dimensional forces that don’t want their existence revealed) and that David has been talking to Arnie’s ghost this whole time. Though Arnie protests David’s determination that he is a ghost, but David ignores him and uses his power to free Arnie’s spirit. David is disappointed that there is now nobody to write his story. John also is not dead at the end.

During the credits, David and John are playing basketball when they find a portal to another dimension. They are greeted by zealots and told that their coming was foretold. The people in this dimension are plagued by a great evil, and David and John were predicted to lead the resistance to victory. John claims that they need to go back to Earth to get weapons, but it is implied that John and David have no interest in ever returning to this dimension. 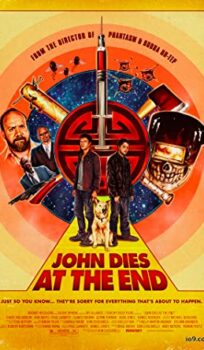