After spending five years at a Tibetan monastery after failing to protect the president of Mozambique during a fatal shooting, Johnny English (Rowan Atkinson) is called back into service to hunt down a terrorist organization called Vortex, planning to kill the Chinese premier using gunmen under the control of a special drug.

English makes his way to a remote Swiss chalet where a meeting is to take place between the British Prime Minister and the Chinese Premier; he accidentally takes the mind control drug meant for MI7 head Pamela (Gillian Anderson) and is primed to carry out the assassination. However, using his Tibetan training, English fights back the mind control and frees himself. He then chases down and defeats Ambrose while on a gondola.

Now a hero, English is taken to see Queen Elizabeth and have his knighthood reinstated; however, he severely beats up the Queen when he mistakes her for the Chinese old lady assassin who had been chasing him throughout the film. 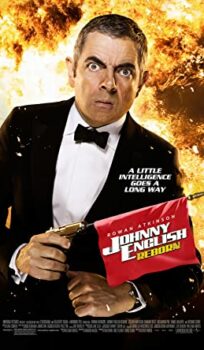