Short Version:
Sgt. Lee actually became close friends with the North Korean soldiers, however when discovered by another North Korean is forced to kill his friends. He can not live with this and commits suicide.

Extended Version:
The true story is that Sgt. Lee (South Korean Soldier) made friends with the North Korean soldiers after they saved him when he was trapped by a mine when relieving himself in a field. He threw rocks at their post because they contained tapes and letters and eventually he steps over the border and along with Pvt. Nam, the group of men becoming close friends. On Pvt. Jeong’s (North Korean soldier) birthday, the South Koreans decide they can no longer come for visits and they have a fond farewell. Before they can leave however, they are discovered, tensions fray and the North Korean soldier who discovered them along with Pvt. Jeong are shot dead, Pvt. Jeong’s body being peppered with bullets as the South Koreans were angry over his desperate decision to try and shoot them.

Sgt. Lee can not live with his decision and commits suicide. Sophie could not get to him in time to save him.

The film finishes with a shot of the unauthorized photo taken by the tourist at the film’s beginning at the border. In it, by chance, the South and North Korean friends all appear. The film ultimately demonstrates the hurdles of reunification between the 2 Koreas. 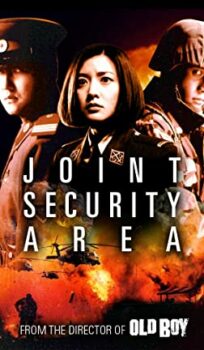