Journey to the Seventh Planet(1961)

A spaceship is on route to Uranus to explore that planet.  As they prepare for landing, they realize that for some undetermined length of time, they have all been unconscious.  They are shocked to discover an Earth-like planet, rather than the cold barren wasteland they expected.

They learn that the planet is inhabited by an alien intelligence that can enter their minds.  Everything they are experiencing on Uranus is false mental images created by the alien.  It wants them to take it back to earth, where it hopes to control all life on the planet.

They find the creature deep in a volcanic cave.  It looks like a giant brain.  Attempts to burn it with a homemade flame thrower fail.  They freeze it with liquid oxygen, then shatter the frozen brain.

They rush back to the ship as the world around them fades back to the true barren rocky surface of Uranus.  The captain sees Greta by the ship, and insists on bringing her back to Earth.  As the rocket lifts off, the effect of the alien mind on the captain wanes, and Greta fades away and disappears. 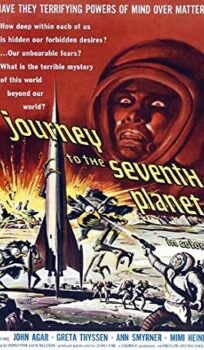