This was considered one of the first psychological westerns and has strong performances from all.

Jubal Troop (Glenn Ford) is a drifter who is found injured by a rancher named Shep (Ernest Borgnine).  Shep takes him back to his ranch to heal and offers Jubal a job as a ranch hand.  This does not sit right with Shep’s other ranch hand Pinky (Rod Steiger in a truly villainous role), who does not like the drifter. But Jubal works hard and Shep takes him under his wing even offering him a job as the ranch boss.

Shep has very young and attractive wife named Mae.  Mae has been previously involved with Pinky.  Now she has her eyes on Jubal, who knows better than to get involved with the wife of the boss.  Pinky has also observed Mae’s attraction and now really has it in for Jubal.

Jubal adds another ranch hand named Reb (played by Charles Bronson in an early role) who becomes his close friend.  Reb tries to help a traveling wagon caravan of religious people seeking a new home, when PInky and his loyal henchman try to remove them forcefully from the land.  The daughter of  the reverend is named Naomi (Felicia Farr) and eventually falls for Jubal.

While on a cattle drive, Jubal is sent back to the ranch and encouters Mae, who tried to seduce him but fails.  At the camp, Pinky is putting ideas into Shep’s head about Jubal and Mae and Shep goes back to the ranch.  Jubal had already left and gone into town.  Mae, who is now asleep thinks Jubal has returned and says his name, making Shep think that Jubal has indeed been having an affair with his wife.  He goes after Jubal and tries to kill him, but is killed instead.  Jubal is also hurt and feels deep remorse for having to shoot his friend, even in self defense.  He rides off and is eventually found by the wagon train, who shield him.  Naomi tends to his wounds.

Pinky has fired everyone up again Jubal for the shooting of Shep.  While the shooting was taking place, Pinky had returned to the ranch and tried to seduce Mae back, but she turned him away.  He beats her and then goes back to the posse looking for Jubal.  Jubal, recovered from his wound, goes back to the ranch and finds Mae dying.  The posse has caught up with him and is now ready to lynch him but Mae is able to tell the sheriff before she dies about Pinky’s deception.  It is Pinky that is hung and Jubal and Reb catch up to the wagon trail. 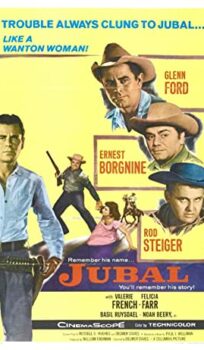