The film focuses on the last few months in the life of Judy Garland (Renée Zellweger), as she performs a series of sold-out concerts in London, as a last effort to revive her waning career. The plot back-n-forths between 1969 and her earlier years, when she, as a teen starlet (played by Darci Shaw) was under the pressure and watch of everyone who surrounded her, so she could fulfill other’s artistic expectations, especially those of blunt and ruthless MGM Studio Head Louis B. Mayer (Richard Cordery).

Her personal demons, hastened by years of substance abuse, slowly but steadily take their toll on her, much to the chagrin of the assisting staff and, particularly, the man who becomes her fifth and last husband, younger entrepreneur Mickey Deans (Finn Wittrock), whom she marries while working in London; this also manifests in her being constantly late for the presentations. Furthermore, being away from her two younger children, Lorna (Bella Ramsey) and Joey (Lewin Lloyd), both of whom live with her ex-husband Sidney Luft (Rufus Sewell) and attend school in California, causes her immense grief.

Matters come to head when she collapses during one of her last shows and is intensely heckled and driven away by a frustrated audience. After this, her commitment ends. However, she returns for one last appearance where, after parting in friendly terms with her assistant Rosalyn (Jessie Buckley), band leader Burt (Royce Pierreson) and fellow entertainer Lonnie (John Dagleish), she gives a rousing performance; then, she gets emotional while singing her signature song, “Over The Rainbow”, but, with the support and help from the audience -led by the gay couple she befriended earlier- she is able to finish, after which, upon everyone’s applause, she claims, with a sad smile: “You won’t forget me, will you? Promise you won’t”.

The film ends with a title card informing of Judy’s death, six months later, at the age of 47, as well as a quote from The Wizard Of Oz: “A heart is not judged by how much you love, but by how much you are loved by others”. 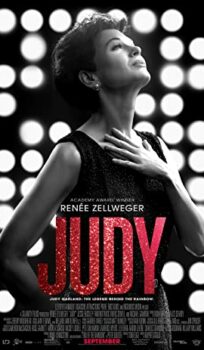