In the early 20th century, siblings Lily and MacGregor Houghton (Emily Blunt and Jack Whitehall) seek out the Tears of the Moon, the petals from a tree that contain healing powers, for the purposes of research and benefiting mankind. A German aristocrat named Prince Joachim (Jesse Plemons) also seeks out the tree to exploit its powers. After arriving in South America, Lily and MacGregor team up with tour guide Frank Wolff (Dwayne Johnson) to seek out the tree, as he has some knowledge of it and has a boat to guide them. Meanwhile, Joachim seeks the aid of Don Lope de Aguirre (Edgar Ramírez), a Spanish conquistador who previously sought out the tree in the 16th century but was trapped within the jungle.

After going through several dangerous encounters with Joachim and the environment, the three are found by a tribe that works with Frank and helps Lily figure out the location and meaning of the arrowhead. Aguirre’s men attack, and it is revealed that Frank is immortal since he previously worked with Aguirre as his cartographer (but they were also like brothers), and Aguirre wanted the Tears of the Moon to cure his sick daughter, but he became corrupted in his pursuit, killing the chief of the tribe, who later cursed Frank, Aguirre, and the remaining men to be trapped in the jungle for eternity. Frank has been looking for the tree to put an end to the curse.

Frank and Lily find the tree’s location while Joachim forces them to help by taking MacGregor, hostage. After uncovering the tree, Lily secures one petal before Aguirre and his men attack. MacGregor causes Joachim to get crushed by a pillar while Frank drives the boat into a wall to block the river, which would permanently trap himself, Aguirre, and the conquistadors in the cavern. Lily uses the petal to save Frank, allowing him to live as a mortal.

Frank joins Lily and MacGregor as they return to London and he begins to live a normal life. 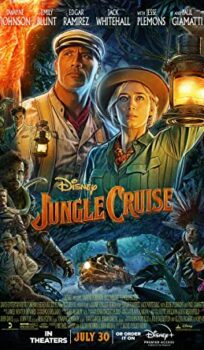