SHORT VERSION: Sent by Sean
Sixteen year old Juno (Ellen Page) becomes pregnant after having sex with her friend Paulie (Michael Cera).  She thinks about aborting it, but a trip to the clinic changes her mind.  Focused on what to do with a baby she doesn’t feel equipped to raise, she settles on giving it up to a nice looking couple who have placed an ad in the local “Penny-Saver”.

LONG VERSION: Sent by Nick
Mark and Vanessa (Jason Bateman and Jennifer Garner) have been trying to have/adopt a child for a while.  They are very excited to meet with Juno, and do so, agreeing on an adoption plan that will see Juno cutting off ties to the child once she is done and the medical bills are compensated.  Throughout her pregnancy, Juno randomly shows up to their house to visit with Mark while Vanessa is at work.  They talk music and movies and quickly become very friendly.  Juno also continues her friendship with Paulie, despite his lack of how to deal with their situation.  She tells him that she never considered them a couple and that he should ask someone else out.  When he does ask someone else out to Prom, she confronts him at school and accuses him of not taking responsibility for any of his actions following their night together and storms off.

Later in her pregnancy, Juno makes one of her visits to Mark and Vanessa’s.  Mark takes her down to the basement and they discuss Prom and slow dance to Mott The Hoople.  Mark then tells her that he has decided to break up with Vanessa and is taken aback by Juno’s reaction to their possible split and what it will do for the baby’s future.  Juno heads upstairs, crying, just as Vanessa comes home.  Vanessa asks Mark what happened and he tells her that he doesn’t think he is ready to be a father just yet, despite the fact that Vanessa is ready on her end.  They fight a little in front of Juno until she leaves out the front door, still in tears.  Later, as Vanessa and Mark sit and discuss their impending divorce, Juno comes by and slips a note under the door for Vanessa.

When Juno gets home, she asks her father if there is any way that two people can effectively be together for their whole lives.  Thinking she is asking about his divorce over a decade ago, he tells her that you need to find someone who loves you even when you’re at your worst…much like he has with his new wife.  Juno realizes that the advice she has received applies to her situation with Paulie decides to patch things up with him at school.  She tells Paulie that she loves him and that he’s the coolest person she knows.  He tells her he feels the same way about her and they make out to seal the deal.

The day finally arrives and Juno is rushed to the hospital.  She gives birth to a baby boy.  After the birth, she lays crying in her hospital bed with her father consoling her.  Paulie, having been at a track event, shows up to see her after figuring out what had happened on his own (when she wasn’t in attendance).  The father leaves them alone and Paulie gets in bed and lays with her.

Meanwhile, Vanessa holds her new son for the first time and is given some kind advice by Juno’s step-mother.  Through voice-over, we are told that Paulie chose not to even visit with the baby and we are shown the new baby’s nursery which contains Juno’s note to Vanessa framed above the crib.

In the closing minutes, Juno rides her bike with a guitar strapped to her back.  She meets with Paulie (also w/guitar), and the two sing a short duet together.  After the song, she kisses him. 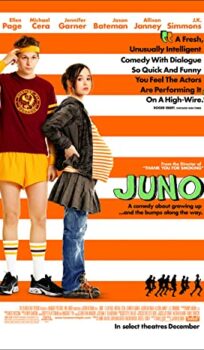