POOPER:
The Indominus is eaten by the mosasaur after being pushed into its tank by the Tyrannosaurus.

LONGER VERSION:
The gnetically modified Indominus Rex and the trained velociraptors were an experiment by the U.S. Armed Forces to be mobile non-human soldiers. She frees herself by tricking the humans into thinking she has escaped, and begins mercilessly killing every living creature she encounters. The island is evacuated and the lab shut down.

When Hoskins (Vincent D’Onofrio) tries to take over, one of the raptors kills him.

The Indominus is able to establish herself as an alpha raptor being that part of its genetic makeup is that of a velociraptor. However, Owen (Chris Pratt) is able to turn his raptors against the Indominus when they are cornered in the main park area.

To tip the scales a little further, Claire (Bryce Dallas Howard) releases the Tyrannosaurus Rex while the Indominus seems to kill all of the raptors. Though the T-Rex is no match for the Indominus, one of the raptors survived and helps to nudge the Indominus close enough to the lagoon so that the Mosasaurus can snatch it and drag her down to the depths of its aquatic enclosure.

The kids are reunited with their parents. Owen and Claire seem to show a romantic interest in one another (they kiss during the dino siege). Dr. Wu (B.D. Wong) is airlifted off the island with frozen samples of dino DNA.

Back on Isla Nublar, the freed T-Rex surveys the land and closes the movie with her signature roar! 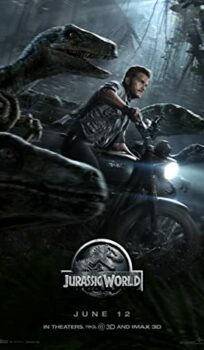