As the Wizard (Malcolm McDowell) prepares the potion at Julia’s (Christina Applegate) house so he, Thibault (Jean Reno), and Andre (Christian Clavier) could go back to the past, Andre tells Thibault that he is staying in the future with Angelique (Tara Reid) and giving up his life of servitude to him, which Thibault begrudgingly accepts. Andre then shows Julia Amber’s (Bridgette Wilson) purse, and tells her that he and Angelique saw her and Hunter (Matt Ross) at a club that they went to the previous night, where she dropped it, confirming Hunter’s infidelity. When Hunter comes by to tell Julia that he called the cops on Thibault, after learning he wasn’t the real Malfete estate heir, Julia confronts him about his infidelity, calls off their engagement, and kicks him out.

As the cops arrive, Julia, Thibault, and the Wizard depart for the museum, since they had to go back in time from the same chamber whence they came. After Thibault exchanges goodbyes and parting gifts with Julia, he and the Wizard drink the potion, and then the Wizard recites the time travel spell, sending them back to the moment before Thibault drank the bewitched wine the Earl of Warwick (Robert Glenister) gave him that made him kill Rosalind (also Christina Applegate). Thibault goes to give the Earl the wine instead, but the Earl backs away in fright and accidentally falls out a window to his death. Later, Thibault gives Rosalind the gift Julia gave him to give to her, and they kiss.

In the present, Hunter unwittingly drinks some leftover potion at Julia’s house and recites the spell, sending him back to Thibault’s time, where he is seized by the police chief and hauled away to be made a servant for Thibault. Julia keeps the Malfete estate intact, and she hooks up with a good-looking attorney who is looking after the French interests in the estate. Andre and Angelique are lastly shown taking a trip to Las Vegas. 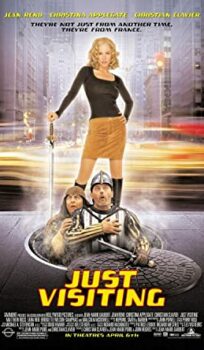