The Justice League uses the combined technology of a motherbox supercomputer and the Kryptonian birthing matrix to resurrect Superman (Henry Cavill), who awakens confused and angry and fights them all before being calmed down by Lois Lane (Amy Adams). New God Steppenwolf (Ciarán Hinds) uses the distraction to obtain the motherbox and combine it with two others in an effort to transform the Earth, but the unified League is able to defeat him and separate the motherboxes once more. Once defeated and afraid, Steppenwolf is swarmed by his own parademons (who are drawn to fear) and pulled into a boomtube (presumably back to Apokolips).

Bruce Wayne saves the Kent Farm from foreclosure and decides to rebuild Wayne Manor into the Hall of Justice. Wonder Woman becomes more public in her heroics and is shown working with police in apprehending criminals. Aquaman/Arthur Curry (Jason Momoa) accepts his larger role in protecting Atlantis and the Earth in general. Cyborg/Victor Stone (Ray Fisher) comes out of seclusion to work with his father to better understand his abilities. Barry Allen/The Flash (Ezra Miller) gets a job working in a a crime lab and dedicates himself to clearing his fathers name. He and Superman have a friendly race.

In a post credits scene, Lex Luthor (Jesse Eisenberg) breaks free of prison and meets with the assassin Deathstroke (Joe Manganiello) to discuss forming their own “league” 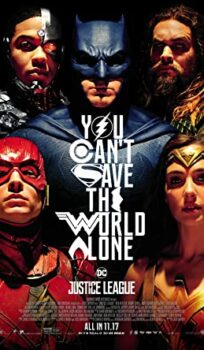