SHORT VERSION
Brian rescues Carrie and kills Early in an abandoned nuclear test site. They eventually make it to California.

LONG VERSION
Brian Kessler (David Duchovny) is an author writing a book about serial killers. He and his photographer girlfriend Carrie (Michelle Forbes) are planning on moving to California and visiting famous murder sites along the way that he will write about. Since they can’t afford the trip themselves, they post a want ad looking for someone to travel with them and help share expenses. The ad is answered by Early Grayce (Brad Pitt), a parolee who wants to start a new life in California with his dim-witted girlfriend Adele (Juliette Lewis). Brian misspelled California as “Kalifornia” in the want ad, thus the name of the movie. Carrie doesn’t care for the couple and doesn’t want Brian to pick them up, but Brian asks her not to be judgmental about them.

Before they leave, Early confronts their landlord about unpaid rent. Early ends up killing him and burying his body next to their abandoned trailer. On the road, Early kills a man in a gas station restroom to steal his money to pay for gas. Later, at a murder site, Carrie becomes upset at Brian because she feels that he is more concerned with the book and being friends with Early while ignoring her and the fact that Early abuses Adele. She confronts Brian and tells him to either abandon Early and Adele at the next stop, or she will leave him. At the next gas station they visit, Brian tells Early and Adele they will have to get out. At the same time, Carrie is watching a TV newscast that says that Early is wanted for the gas station murder (he was seen on a security camera). An angry Early enters the station and sees himself on TV. He takes the attendant’s gun and kills him with it, then takes Brian and Carrie hostage as they go back on the road.

Despite holding them as hostages, Early insists that Brian and Carrie continue with their book project, even though Early wonders how someone can write a book about killing if that person has never killed. At a murder site, Carrie tries to convince Adele to leave Early just as two police officers show up. Just as they recognize their car as the one Early is in and call for back-up, Early kills them and they flee. They eventually arrive at the home of an elderly couple, where Early promptly kills the husband. While that is happening, Adele frees the wife to get help. When Early goes to chase after her, Adele hits Early with a small cactus and tells him she wants nothing more to do with him. Early then kills Adele, handcuffs and knocks out Brian, and takes Carrie.

When Brian comes to, the elderly woman has returned and gives the still-handcuffed Brian her truck to find Carrie. He eventually finds them at an abandoned nuclear test site that resembles suburban homes. Brian finds them in one of the homes and knocks out Early with a shovel. After Carrie is freed and they are leaving the house, Early comes to and attacks Brian. Early stabs Brian repeatedly while Brian goes for Early’s gun. Just as Early is about to finish him off, Brian gets the gun and shoots Early. When he reaches for the handcuff keys around Early’s neck, he grabs Brian. Just as the police arrive, Brian shoots Early again, this time killing him.

The movie ends with Brian and Carrie living on the beach in California. Brian is finally writing his book, and Carrie’s earlier photographs have been selected to be shown in a gallery. 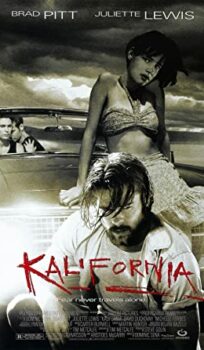