According to Wikipedia, this movie inspired Reservoir Dogs.  It had an all star cast of tough guys from the golden age of Hollywood.  It is a great movie, Reservoir Dogs wishes it were this movie.  Unfortunately, the weak name has probably played a role in it being forgotten.  Only a short segment in the beginning even takes place in Kansas City.

A man who identifies himself only as Mr Big has planned a “perfect crime”. He knows the schedule of a bank armored truck and the schedule of a flower delivery truck coincide, so that they are always parked side by side for a few minutes.  He recruits 3 criminals on the run to rob the armored truck. They get a second truck to look just like the florist truck, and dress like the floral delivery man.  Mr Big figures the floral guy may take the blame for their crime.

In all their meetings, all the robbers wear masks and use fake names, so they can not identify each other.  They rob the bank truck, and kill 2 guards in the process.  They are to meet in Mexico in a few months, once the heat has died down, to divide the money.  The police suspect the floral delivery man, Joe Rolfe (John Payne).  They finally let him go.  His face has been in all the papers, he can not get a job anywhere and he feels his life is ruined.  Rolfe decides to track down the criminals himself, to prove his innocence.

Rolfe tracks Pete Harris (Jack Elam) to Mexico.  By beating and threatening him, Rolfe learns the details of the plot, but Pete does not know the identities of the other criminals.  Each criminal has a playing card to identify himself to the others.  When the Mexican police shoot Pete, Rolfe changes plans and decides to impersonate Pete at the meeting and get a share of the cash.

Mr Big is really Foster.  Foster was Kansas City chief of police, but backed the wrong candidate for mayor.  Foster was fired, and humiliated as being too old to fight crime.  Foster planned all this so he can solve a big crime that the new guy could not.  Foster has notified the insurance investigators.  His plan is to turn in the other guys and the money.  Since no one knows he is Mr Big, he will look like a hero and get the reward money.  Foster is there with his daughter, pretending to be on a fishing vacation.  The daughter is falling for Rolfe.  Foster tries to warn her away from Rolfe, without blowing his cover and revealing he is Mr Big.

Foster, Rolfe, Kane (Neville Brand), and Romano (Lee van Clef) go out in a boat, with the money.  Foster signals the investigators to move in. Romano wants all the money for himself.  He shoots and kills Kane.  Foster and Romano shoot each other.  Romano dies.  The investigators arrive. As Foster dies, he tells them that Rolfe was innocent.  Rolfe gets the reward money for solving the bank robbery, and the affection of the daughter. 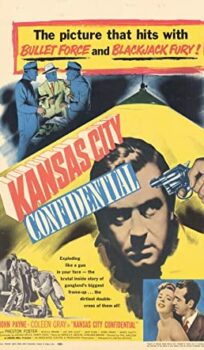