SHORT POOPER:
Jiro (voiced in the English-dubbed version by Joseph Gordon-Levitt) succeeds in having the prototype for his new aircraft, Mitsubishi A5M, tested. Everyone, including Jiro’s curmudgeon mentor and supervisor Kurokawa (Martin Short) gleefully celebrate, but he doesn’t because he is distracted by a strange wind gust -an inference that his beloved wife Nahoko (Emily Blunt) has died from tuberculosis complications-. A few years pass and, in the aftermath of World War II -the crushing defeat and surrender of Japan, part of it-, Jiro laments that his airplanes were used as war instruments; however, the spirit of Giovanni Caproni (Stanley Tucci) appears upon him, once more, to reassure him that he still succeeded in creating the beautiful machines he had been vying for, all his life. Simultaneously, Nahoko also shows up and instigates him “to live” -life to its fullest, that is-.

LONGER VERSION:
While Jiro is hiding at Professor Kurokawa’s house, because of his connection with Castorp (Werner Herzog) -deemed an enemy of the Nazi regime and, by way of consequence, of Japan, as well-, Nahoko -who went to a sanatorium located in the mountains, to be treated following a lung infection, and has been diagnosed with tuberculosis- reacquaints with Jiro. Kurokawa and his wife (Jennifer Grey) bless the couple; however, because Kurokawa refuses to have an unmarried couple living with them, Jiro makes the impromptu decision of marrying Nahoko.

Jiro’s younger sister, Kayo (Mae Whitman), who is now a medical doctor, warns him that tuberculosis has no cure and an inevitable ending -it is to be noted the action takes place in the late 1930s/early 1940s when there was still no cure for the disease-, and Nahoko is not getting any better, but Jiro just cares about having Nahoko by his side. He struggles to find a balance between working incessantly on his designs and dedicating time to his doting wife, whose health is, indeed, deteriorating over time.

The day Jiro leaves for the very expected test flight of his newer prototype, the Mitsubishi A5M, Nahoko, knowing she is doomed to die, makes the decision to return silently to the sanatorium; upon doing so, she leaves what basically are letters expressing her last will. Kayo, who came to love Nahoko as an older sister, tries to prevent her departure but is devastated when she is too late to achieve it.

The test flight is a success and everyone -even Kurokawa- has a happy celebration; yet, at the same time, a strange, powerful wind gust catches the attention of Jiro, preventing him from reeling in his accomplishment -this is an implication of Nahoko’s off-screen death-.

A succession of intense war images follows, indicating how Japan came to be shamefully defeated in the latter years of World War II. By the late summer of 1945, following the ravaging air raids -and, possibly, the two atomic bombs-, Jiro laments how he saw his dream of creating some beautiful turn into a nightmare, as his airplane models became flagship war machines for the Empire. The spirit of inventor Giovanni Caproni appears to him once more, corroborating the “10-year-span of creativity for artists and inventors” as the same for Jiro, and comforting him with the thought that he was still able to fulfill, in a way, his lifelong dream. At that same time, a parade of planes passes by and the pilots respectfully salute Jiro; and the spirit of Nahoko -complemented with an image of her parasol she used for painting in the fields- encourages him to live life, the best way he can. 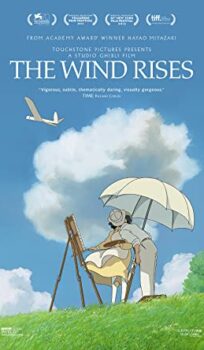