After Joe (Matthew McConaughey) kills Chris and Dottie’s mother Adele (Julia Adams), the family learns that her boyfriend Rex is actually the beneficiary to her life insurance policy.

Joe discovers that Rex and Ansel’s wife Sharla (Gina Gershon) were having an affair and created a plan to get Chris (Emile Hirsch) to kill Adele so they could get her life insurance, and reveals this to Chris and Dottie’s father Ansel (Thomas Haden Church).  After assaulting Sharla, Joe tells Ansel that he is keeping Dottie (Juno Temple), and announces to the family that Dottie has accepted his proposal of marriage.

Chris is fleeing town to avoid his creditors and plans to take Dottie with him, and tells Joe that he won’t let him have his sister.  A fight breaks out and Dottie seizes a gun, kills Chris and shoots her father in the stomach.  She tells Joe she’s pregnant, and he’s delighted.

The film ends with Dottie aiming the gun at Joe and her finger tightening on the trigger. 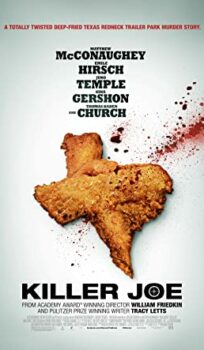