POOPER
Ford gets the upperhand on Kovac, but he doesn’t kill him.  He confesses to his actions in Bosnia and lets Kovac go.  Kovac returns to Serbia and Ford meets his son to make up for missing his grandson’s baptism.

LONG VERSION
Emil Kovac (John Travolta) is a former Serbian soldier who fought in the Bosnian War.  He was captured by US Army Special Forces and sentenced to be executed for genocide, but he survived.  18 years later, he learns of the identities of the men who were responsible for the executions of his fellow soldiers.  The one who gets his attention is their commander, Colonel Benjamin Ford (Robert DeNiro), who is now retired and lives in solitude in a cabin in the Appalachian Mountains.  Posing as a tourist, Kovac befriends Ford by helping him with his broken down car.  Ford takes him back to his cabin and, while sharing drinks and war stories, they agree to go hunting together the next day.  Neither man hunts with a gun; they both use a bow and arrow to hunt.

The next day, Ford gives Kovac a walkie-talkie and they begin to pursue an elk.  Ford is in a tree and has the shot, but he won’t take it, and tells Kovac to take it instead.  Kovac tells Ford that he has changed since the war, since the old Colonel Ford would have taken the shot.  Kovac then starts shooting at Ford.  Ford falls out of the tree, breaking his bow, and a chase ensues through the forest.  Kovac shoots an arrow through Ford’s leg, and he is able to string up Ford through his wound.  Kovac then tells a screaming Ford that he doesn’t want to kill him, he just wants a confession for his actions in the war.  Ford is able to fight back and then cuts himself down.  During their ensuing fight, Ford falls into a raging river and gets away.  While hiding in a cave, Ford utilizes his Army training to treat his leg wound, and uses the string to fashion a new bow.

Meanwhile, Ford’s son Chris (Milo Ventimiglia), along with his wife Sarah and newborn son Matt, arrive without notice at the cabin to pick up his father to attend the baby’s baptism scheduled for that day.  Both Ford and Kovac saw the invitation in the cabin the night before, but Ford chose to go hunting instead of the baptism. Both Ford and Kovac arrive at the cabin at that time, and Kovac threatens to kill Chris if Ford calls out for help or refuses to continue the hunt.  Ford tells Kovac over the walkie-talkies that he’ll play if he lets his family go.  Kovac agrees, and as Chris and his family drive away, he approaches the cabin to take the bottle of wine that Chris had left for his father.  As he is drinking from it, Ford shoots Kovac in the mouth, putting the arrow through both of his cheeks.

Kovac is tied down to a table inside the cabin, and now it’s Ford who wants to hear a confession.  Kovac was a member of the Scorpions, a Serb paramilitary group who was responsible for the genocide of Bosnian Muslims during the war.  Since the Scorpions tortured the Bosnians, Ford begins to torture Kovac to let him know how it feels.  But Kovac is able to break free and knocks out Ford.  He picks up the Winchester rifle that is hanging on the wall, then puts Ford in his car and he drives through the mountains, all while telling how he was paralyzed from the attempted execution but was able to recover.  Ford then wakes up and attacks Kovac, causing the car to go down the mountainside.  Both survive the crash, and despite their injuries, Kovac is able to take Ford far into the forest.  He tells Ford he hasn’t killed him yet because he is still waiting for his confession.

Once again, Ford is able to get away from Kovac, and they fight inside an abandoned church, where Ford finally beats him.  Ford marches Kovac to the edge of a cliff and prepares to execute him.  But instead of killing him, Ford tells Kovac what he wants to hear.  Ford and his unit found a Serbian-run death camp, and they captured the Scorpions who were there.  Ford gave the order to execute the Scorpions, but while the soldiers were killing their prisoners, he gravity of the situation hit him.  Not wanting to become something he hated, Ford shot his Scorpion in the back instead of killing him.  That Scorpion was Kovac, who says that he never killed anyone; he was just a toolmaker.  Ford then says that his actions in Bosnia made him unable to look his son in the eye, and they have not had a relationship since.  That’s why he chose not to go to the baptism.  Despite all that Ford said, Kovac is ready to meet God to atone for his sins and demands that Ford pull the trigger.  Ford does, but he shoots into the air and throws the rifle over the cliff.  He then cuts Kovac loose and they agree to end the fight.

The final scenes show Kovac back in Serbia, talking to the barmaid in his favorite bar.  She notices his wounds and he tells her he is healing and they strike up a conversation.  Ford shows up at Chris’ house and says that he’s sorry for not showing up.  Father and son hug and Chris introduces Matt to his grandfather. 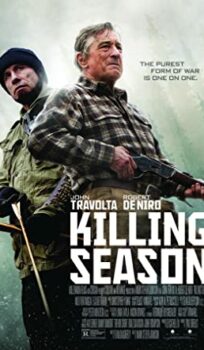