Billionaire drug lord Poppy Adams (Julianne Moore) destroys all Kingsman bases, leaving Eggsy (Taron Egerton) and Merlin (Mark Strong) as the sole survivors. They head to Kentucky to team up with their American counterparts, the Statesmen, to stop Poppy. There, they find out that their former comrade, Harry Hart (Colin Firth), is alive after being believed to be dead, but he now suffers from amnesia after being revived. Eggsy manages to bring his memories back.

Poppy has laced recreational drugs around the world with her toxin in order to gain the recognition she desires. Eggsy, Merlin, and Harry head to her base to fight her and her henchmen, with Merlin dying after stepping on a land mine to let Eggsy and Harry get away. Eggsy kills Poppy by sticking her with her own tainted heroin, but she gives up the codes for the antidote before she dies. Before they can release the antidote, traitorous Statesman Agent Whiskey (Pedro Pascal) tries to stop the Kingsmen so that all drug users can die (he hates them after his wife was killed by meth-heads). Eggsy and Harry kill Whiskey and save the world again. 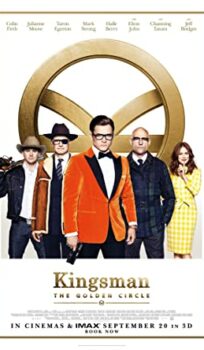