Nick Bianco (Victor Mature) is an ex-con who can not find any work to support his family.  He is arrested in a Christmas eve jewelry store robbery.  He refuses to squeal on his partners, earning the admiration of up and coming mobster Tommy Udo (Richard Widmark).  Nick won’t talk, because he thinks his family will be taken care of.

After 3 months with no letter from his wife, he learns that she killed herself.

Nick gets an unexpected visit from Nettie, a former neighbor who used to babysit his two girls.  He learns from her that his wife was having an affair with Rizzo, a fellow from the jewelry robbery who was supposed to be the one supporting the family while Nick was locked up.  It also becomes clear that Nettie is in love with Nick.

Nick goes back to the D.A., willing to give them whatever they need so he can take care of his girls.  Nick feeds them info which they use to make arrests.  They make it look like the info is coming from Rizzo, to protect Nick.  Tommy Udo goes to kill Rizzo.  Upset that Rizzo skipped town, Udo pushes Rizzo’s wheelchair-bound mother down the stairs to her death.

The police really want Udo, and they free Nick to work for them.  Nick befriends Udo and gets all the dirty details on his crimes.  Nick testifies against Udo in trial.  Nick also has married Nettie, and the girls live with them.  Udo is acquitted, and walks free.  Nick knows Udo will come for him.  After a sleepless night, where every sound has him jumping, Nick realizes he can not go on like this.  Nick goes to confront Udo.  He calls the police to come, and times it so Udo will shoot him just as the police arrive (sacrificing himself so his family will be safe).  A voiceover from Nettie reveals that Nick survived the shooting, and returned to the family. 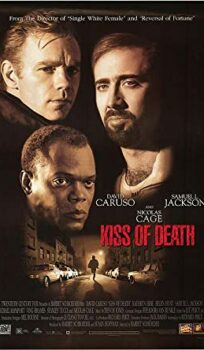