Pooper:
Jesper and Klaus deliver the Christmas gifts and continue expanding their present-giving operation. Jesper and Alva get married. Even after Klaus passes away, he continues to deliver presents around the world (implied to achieve this through magical means).

Long Ending:
Jesper (voiced by Jason Schwartzman) is the spoiled heir to a global postal delivery service. Although his wealthy father wants him to take over the business, Jesper has no drive or work ethic. In hopes of forcing his son to mature, Jesper’s father sends Jesper to work at the post office in the far away snowbound town of Smeerensburg. If Jesper delivers 6,000 letters, he can return home to a life of luxury. If he quits, he will be cut off from the family fortune.

No postal worker has ever survived working in Smeerensburg. The townspeople are divided into two clans – the Ellingboes (whose leader is voiced by Will Sasso) and the Krums (whose leader is voiced by Joan Cusack). The clans are engaged in a centuries-long conflict that leaves the town in a perpetual state of ruin. They all abuse and mock Jesper as an interloper and will not send any letters. The only semi-kind person is Alva (voiced by Rashida Jones), who came to the town to be a schoolteacher but now works as a fish seller as all the kids refuse to go to school.

Jesper searches high and low to find anyone who will send a letter. He eventually journeys out to the home of a toymaker named Klaus (voiced by J.K. Simmons), who lives a solitary life outside of town. Klaus is a huge man who intimidates Jesper. As Jesper flees Klaus’ house, he drops a drawing he was holding from one of the town’s children that shows the child to be very unhappy. Touched by the drawing, Klaus finds Jesper late at night and forces Jesper to sneak into the boy’s house and deliver a toy to him.

The boy begins spreading the news to the other children that if they give a letter to Jesper detailing their sorrows, Jesper will bring them a toy from Klaus. Realizing that this scheme is the only chance he has of reaching his goal, Jesper delivers the letters to Klaus and then helps Klaus deliver toys to the townspeople. The pair soon strike up a quiet friendship as well. As news of the toy deliveries spread throughout the town, the children begin developing a legend around Klaus based on glimpses they see of him at night (i.e., using reindeers, entering the house through the chimney, etc.). The children also begin going to school so that they can learn how to write letters to Klaus (and eventually, the children end up going to school just because they think it is fun).

When Jesper tells a local boy that Klaus only delivers toys to good children, the children begin doing good deeds around the city. Their good deeds inspire the adults from both clans to start putting aside their differences. The legend of Klaus even begins reaching other lands, as a foreign girl named Márgu (voiced by Neda Margrethe Labba) appears at the post office to mail a letter to Klaus. As he nears his goal of 6,000 letters, Jesper begins realizing that he cares more about delivering toys and helping the town than returning to his lavish lifestyle. The clan elders, however, are opposed to the newfound peace. They plot ways to stop Jesper and Klaus from spreading goodwill.

Jesper learns that Klaus was married and he made all of the toys they’ve been delivering in anticipation of his own future kids. But the pair were unable to conceive children, and Klaus’ wife since passed away. Klaus intended to stop the deliveries once all the toys he made over the years are distributed. Jesper convinces Klaus that they have been doing too much good to stop. They eventually agree to deliver newly-made toys to all the children on Christmas Eve. The pair are aided by Alva (who also falls in love with Jesper) and Márgu’s family (who wish to spread joy to others like Klaus and Jesper gave to them).

The elders get their followers to mail so many letters that Jesper doubles his goal. They then tell Jesper’s father of Jesper’s success. On Christmas Eve, Jesper’s father comes to the island to bring his son home. When Klaus, Alva, and the others learn that Jesper was using the delivery system for his personal benefit, they turn their back on him. Although Jesper initially plans to return home, he decides that he loves his life in Smeerensburg and decides to stay. Jesper returns in time to help Klaus and the others stop the elders from destroying all the presents they built for Christmas. Klaus and Jesper successfully deliver all the Christmas presents and, in so doing, end the feud between the two clans once and for all.

Jesper and Alva get married and have children. Jesper narrates that their toy delivery operation expanded every year. 12 years later, however, Klaus disappeared after seeing the spirit of his wife call out to him. Since Klaus has gone away, he magically delivers presents to all the world’s children every Christmas Eve in accordance with the legends spread by the children of Smeerensburg. Jesper notes that this is his favorite time of the year as he finally gets to see Klaus again. 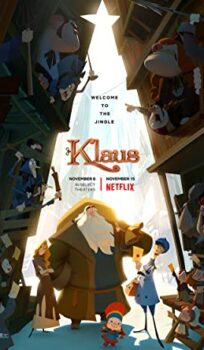