The movie takes place in 1940 Shanghai. Sing (Stephen Chow) and his fat companion yearn to be part of the most feared gang in all of Shanghai, the Axe Gang. Sing tries to be a member of the Axe Gang by first, trying unsuccessfully to stab the Landlady (Yuen Qiu) and also he has flashbacks to when he was a kid and he bought a martial arts tutorial from a peddler called the “Buddhist Palm” and he tries to save a girl with a lollipop from punks but he gets beaten up silly and urinated on. Later, when he sees the girl who offers the lollipop to him for saving her life, he rejects it and runs away. He is then caught by several Axe Gangsters who take him to a casino.

Sing is then now pronounced an official member of the Axe gang. He is told that he has one job left to do. He goes to an insane asylum that is run by Boy Scouts. By using a map, he is able to find a door which leads to a room. There, he breaks out an old aged man called “The Beast” (Leung Siu-lung) and brings him to the casino. There, the Axe Gang is surprised that the Beast is able in stopping bullets and they praise him in joining the Axe gang. Then, the Landlord (Yuen Wah) and the Landlady come to the casino to fight the Beast. It turns out that the Landlord and Landlady are no match for the Beast. However, they get saved by Sing who hits the Beast in the head with a wooden beam. This causes the Beast to savagely beat him to a pulp. The Landlord and the Landlady then come to the rescue and save Sing. Meanwhile, Brother Sum accuses the Beast of accidentally letting the Landlady, the Landlord, and Sing get away. The Beast angrily strikes Brother Sum in the face, killing him instantly.

Meanwhile, at Pig Sty Alley, the Landlord and Landlady, having been defeated, take Sing to a medical center where his head is treated with herbs. Then, the Beast comes to Pig Sty Alley to wait for Sing to appear. He then sees a caterpillar morphing into a butterfly. That means that Sing is fully restored and is also called “The One” who can stop the Beast and the Axe Gang. Sing fights off most of the Axe Gangsters by stomping their feet and kicking them through walls and through the air. Then, Sing and the Beast fight with punches and kicks. At one point, the Beast poses as a frog and tries to defeat Sing. However, Sing has the power of the Buddhist Palm and when the Beast throws Sing into the air, he comes back down and causes a hand imprint to appear in the floor. The Beast finally surrenders.

Sing’s fat companion opens up an ice cream store and Sing and the mute girl reunite and they reminisce being young and they walk off into the sunset. Before the movie ends, a peddler asks a boy to purchase his latest tutorial. 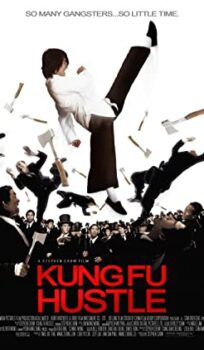