Pooper:
Po brings Kai to the spirit world and, aided by chi from his friends and family, defeats Kai in battle. Po and the spirits captured by Kai are returned to the real world. Po then becomes the next great kung fu teacher, teaching all those who wish to learn how to channel their chi.

Long Ending:
The film begins with long deceased Master Oogway (Randall Duk Kim) being confronted by a martial arts master named Kai (J.K. Simmons) in the spirit world. Kai has been training for 500 years for this rematch. He defeats Oogway and turns him into a jade charm. The spirit power from his defeat of Oogway allows Kai to open a portal back to the real world. He vows to defeat every martial arts master in the world, including the champion Oogway selected to face Kai.

In the training center, Master Shifu (Dustin Hoffman) announces his retirement and selects Po (Jack Black) as his successor. Po puts the Furious Five – Tigress (Angelina Jolie), Monkey (Jackie Chan), Mantis (Seth Rogen), Viper (Lucy Liu), and Crane (David Cross) – through a disastrous training session. Afterwords, Shifu explains to Po that he is retiring to learn how to control and utilize a power called chi – a spiritual power that can restore life. He states that Po must learn how to become a teacher to advance his own skills as a martial artist.

Kai begins attacking martial arts masters and turning them into jade charms. Once captured as charms, they can be called upon to fight for him as zombie-like creatures. Meanwhile, a panda named Li (Bryan Cranston) appears in town looking for his long-lost son, Po. Li and Po begin bonding, much to Po’s adoptive dad Ping’s (James Hong) chagrin. The group learns of Kai’s return and find the scroll detailing his history. 500 years prior, Kai was Oogway’s best friend and martial arts companion. During a battle, Oogway was seriously injured. Kai carried Oogway to the panda village where they used the spiritual power of chi to heal him. Kai realized that chi could be used to dominate the world and sought to take all chi for himself. Oogway fought Kai, banished him to the spirit world, and erased all traces of Kai’s legacy. Now, Kai seeks to destroy Oogway’s legacy. Chi is the only force capable of defeating Kai.

Li claims that his panda village can teach Po the art of chi. To prepare for Kai, Po and Ping journey with Li to the panda village. There, Po begins to learn all the ways of panda society. Ping and Li eventually befriend each other, agreeing that they can both be a father to Po. Meanwhile, Kai attacks and defeats Shifu and all of the Furious Five except for Tigress. She escapes to the panda village to warn Po of Kai’s plan to destroy all the pandas, including Po. Li finally reveals that the pandas no longer know how to harness chi and he only told Po they knew how to use the power to keep him from attacking Kai (he didn’t want to lose Po again). Po then embraces his panda heritage and teaches the pandas how to convert their innate abilities (such as ribbon dancing, hackey sack, eating, and hugging) into kung fu attacks.

Kai attacks the village and his zombies are defeated by the townspeople. Po attacks Kai and tries to use a fatal move on Kai, with no success. Kai explains that since he is already dead, he cannot be killed again. Po then uses the fatal move on himself while grabbing Kai, sending both himself and Kai to the spirit world. Once there, Kai begins to turn Po into a jade charm.

Ping, Li, Tigress, and the panda village use their love for Po to channel their chi and send it to Po in the spirit world. Po uses the chi to overwhelm Kai and defeat him once and for all. All the captured spirits are released and restored. Po gets to talk with Oogway while in the spirit world. Oogway explains to Po that he realized Po could learn the techniques of traditional  kung fu while embracing unorthodox and new techniques like the panda’s chi. That is why he selected Po to be his successor, as he could herald in a new age of kung fu. Po then returns to the real world and return to the training center with his panda family in tow. Po becomes a master teacher, teaching all those who wish to learn how to access their chi. 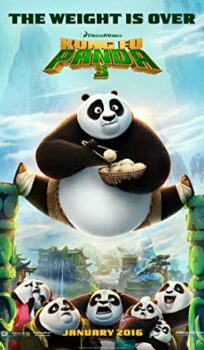