Aspiring actress Mia (Emma Stone) runs into jazz musician Sebastian (Ryan Gosling) when she hears him playing piano; but he blows her off.  When she runs into him again at a party, the two bond over a dance number while walking to their car.  She leaves her boyfriend for him and they inspire each other to follow their dreams – he encourages her to write a play for herself to act in and she encourages him to open up his own jazz club.

To raise money for the club, Sebastian joins a band which ends up becoming very successful while, simultaneously, Mia’s one-woman show flops.

Mia moves back to Nevada, but the play has caught the eye of a casting director who reaches out to Sebastian when she can’t get a hold of Mia.  He drives hours to Nevada and brings her back to L.A. for the audition.

Five years later, we learn that Mia has become a huge movie star and he has opened a very successful jazz club but they did not end up with each other.

In an epilogue, we see what their life could have been, depicted in a ten minute song-and-dance. 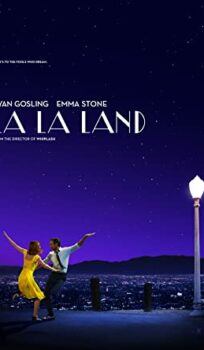