The film is presented in an episodic manner, with keywords marking each chapter, as if showing the psychological stages of the ordeal lived throughout by the main protagonist.

After 33 years of living in hiding and isolation -both literally and figuratively-, as well as dodging many close calls of people almost discovering he was alive, and enduring the burden of living -and forcing his family to live- a lie, Higinio (Antonio De La Torre) hears on the radio that the Franco Government has declared an amnesty that would fully pardon anyone considered guilty of subversive actions against the regime if happened prior to 1939 -his ordeal started in 1936-. He shares the news with his wife Rosa (Belen Cuesta), who, enthusiastically, decides to plan a vacation at the coast with him -making up for the honeymoon they never had the chance to have-. However, due to the decades of confinement and isolation, Higinio doesn’t feel ready to come out and makes excuses about it. This upsets Rosa, who decides to leave without him, despite his pleas of staying.

The final chapter, labeled SALIR (“to go out”), finds Higinio mustering the courage to leave his self-imposed prison and step outside, gazing at his surroundings with amazement. He is even taken aback by someone saluting him, to which he timidly responds. He eventually catches up with Rosa, who didn’t catch the bus she said she would, but, instead, was forcing him to take the step. They are seen walking together and passing by what used to be their previous house, now visibly changed and belonging to someone else; Higinio stops and looks towards the window, as the camera pans from an inside, curtain-covered view -symbolizing how he had to live his life in seclusion, for more than 30 years- and the shadow of someone peeking and moving away is seen -inferring it was, perhaps, someone in his same situation-.

As the film ends, title cards show that, since the publication of the amnesty decree of 1969, there were numerous cases of people -known as “TOPOS” (“moles”)- hiding in their homes for years, in fear of Government repression, that became public. 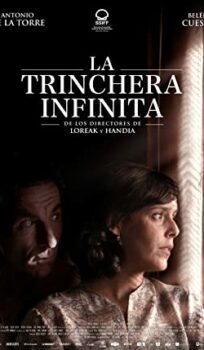