Lt. Jack ‘Jigsaw’ Lasky (Ben Gazzara) accidently shot his own partner Lt. Hatcher, who he’d misstook for the ladykiller as Hatcher emerged from a darkened tunnel. He then saw the ladykiller observing the tragedy, whispering “Whoops a daisy” before fleeing into the night. Richard Darling and Lt. Jack ‘Jigsaw’ Lasky realize the killer is using the tunnels below the campus to move around and is targeting the models who posed for the naked portraits in a local art exhibition advertised on the local paper. They realize that he’s last victim will be Jack’s own daughter Jennifer, she is indeed attacked at the exhibition and during the struggle she rips off the mask revealing the killer to be none other than Professor Dandridge who is not only the piggybank murderer but before that the ladykiller. Richard Darling and Lt. Jack ‘Jigsaw’ Lasky show up and Richard is seemingly shot to death. Dandridge reveals that he once caught his wife having sex with one of his own students, which sparked off his hatred for flirtatious women who were guilty of lust. As he’s about to take out both father and daughter Richard revives and shoots Danbridge in the back, his skill in meditation stopped him bleeding to death. 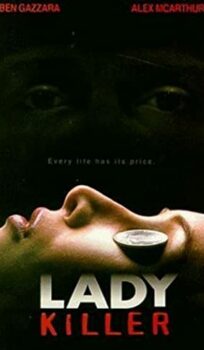