When a scientist is killed researching in a lake in Maine, Kelly Scott (Bridget Fonda) is sent by her museum to investigate the origin of a tooth found when the scientist was killed.

When she arrives she is met by Jack Wells (Bill Pullman) and Sheriff Hank Keough (Brendan Gleeson) who take her out on the lake to see what they can find out. Soon after they start their investigation, they are joined by Crocodile expert Hector Cyr (Oliver Platt) who believes that it was a crocodile that killed the scientist.

During the investigation they come across Delores Bickerman (Betty White), a woman who lives on the lake. When questioned by the sheriff, she avoids their questions by telling them she killed her husband, which they tend not to believe and leave.

The next day Hector and Hank get into a fight next to the lake. A bear comes out of nowhere and begins to attack them, but suddenly a giant crocodile comes out of the water and eats the bear whole. The others are in disbelief and run to hide. Later while looking for the crocodile they come across Delores feeding it one of her cows, treating it as if it were a pet. They confront her and learn that the crocodile ate her husband but she didn’t report it because she didn’t want anyone to kill it.

After some close encounters with the crocodile Hector and Kelly talk Jack into capturing it instead of killing it. Jack and Hector use a cow hanging from Hector’s helicopter to try to lure the crocodile onto land so they can trap it in nets. They wait hours but nothing happens so they begin to pack up when the crocodile jumps up at the cow, pulling the helicopter into the water with Hector inside. Hector gets out but is stuck in the water with the crocodile, but it decides to go on land after Kelly. Jack tries to take the attention of the Croc, which causes its tail to knock Kelly in the water. She swims out to Hector as the crocodile gives chase. They are able to escape as the crocodile gets stuck in the cockpit of the copper. Jack decides to kill it, but Kelly begs him to let it live since it is stuck and sedated, which he hesitantly agrees too. As Hector walks out of the water, a second huge crocodile attacks him, but the sheriff blows it up with his new grenade launcher.

Everyone makes it out alive including the cow as the other crocodile is shown being taken to a facility and Jack asks Kelly out on a date, which she agrees to.

The last scene shows Delores walking out to her dock with breadcrumbs. As she throws them in the water, small baby crocodiles swim up to feed on the crumbs. 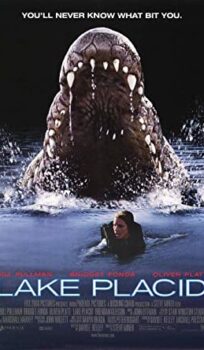