Land of the Dead

The zombies have gotten smarter. Led by a former gas station attendant (Eugene Clark), hordes of tool-using, problem-solving zombies cross the river protecting the elite city of Fiddler’s Green. Kaufman (Dennis Hopper) hired Riley (Simon Baker) to get back the city’s super-tank, stolen by a spurned Cholo (John Leguizamo). Cholo is bitten by a Zombie, Riley reclaims and rides the super-tank out of town towards Canada, and the gas station attendant and his minions sack Fiddler’s Green. Kaufman ends up dying in an explosion caused by the attendant, with zombie Cholo moments away from eating him. 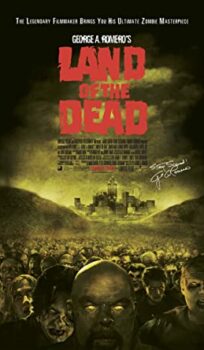