Angered over how the Turners have become sheep farmers and claimed prime grazing land that he had been freely using for his own flock, Sam Garland (Frederic Forrest) – along with his sons Josh (Clayton Barclay Jones) and Jim (Charlie Hofheimer) and a few henchmen – trespasses onto their land one night and steals all of their sheep. Having sensed from inside the house that something is wrong, Lassie manages to get Steve (Jon Tenney) to let her out so she can check on the flock, but Josh and Jim – having anticipated that she would make an appearance – ensnare her in a net and put her in the back of Sam’s truck, and Sam locks her in his barn upon returning to his land.

Lassie is able to escape in the morning by jumping out of a high window, and she runs back to the Turners’ house and alerts Matt (Thomas Guiry) to the theft of the sheep. She then has him follow her to the land where the Garlands have put them, and Matt decides that they must get them home immediately. Shortly afterward, Steve notices himself that the sheep are missing and tells Laura (Helen Slater) about it. As Matt and Lassie are directing the sheep through the woods back to their farm, they are confronted by Josh and Jim, the former of whom is carrying a rifle. Josh orders Matt to bring the sheep back, but Matt refuses, then turns his eyes toward Lassie and tells her to go on home. Josh takes aim at Lassie, but Matt thankfully shifts his attention back onto Josh seconds later and pushes the rifle barrel upward just as Josh pulls the trigger, then he grabs the rifle and throws it far into a nearby river. Steve, Laura, and Sam all hear the gunshot and go in the direction they heard it come from. Matt and Jim get into a brawl while Josh ventures out into the river to retrieve the rifle, but the strong current overtakes him and sweeps him away. Matt orders Lassie to get the sheep back to their farm, and after he notices Josh flailing around in the water and yelling for help, he decides to swim out and save him, with Jim following them along the riverbank. After escorting the sheep toward the farm for a few moments, Lassie gets the feeling that Matt might be in danger and heads back to him.

Matt manages to get Josh to the safety of a large rock jutting out of the water just before a series of rapids, but Matt soon gets swept down the rapids himself, with a waterfall looming in the distance. Lassie hops into the river and swims out and gets a hold of Matt, and she starts helping him back to shore just as Steve and Laura appear on the scene. Matt saves himself by grabbing onto a downed tree, but the current gets the better of Lassie, and she seemingly drowns and goes over the waterfall. Steve gets the heartbroken Matt to safety, and Sam then shows up and meets with his sons. After Jim tells him that Matt saved Josh’s life, Sam apologizes to the Turners, both for what he did to them and for the presumed loss of their dog.

Later on, the Turners hold a memorial for Lassie at the tree on their land that Annie (Matt’s deceased mother) carved her initials into when she was younger, and Matt carves Lassie’s name just above hers. Moments later, we find out that Lassie is injured but alive, having washed up on the riverbank further downstream. She spends all night and into the morning limping her way back to Matt, and she arrives outside his school and situates herself near his classroom window so he can see her. When he does, he joyfully runs out and embraces her. 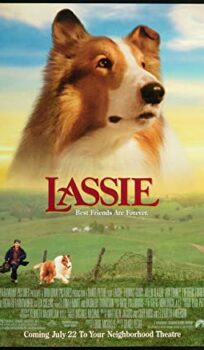