With the Sheriff (Kurtwood Smith) dangerously close to discovering the location of the tribe, Lewis (Tom Berenger) decides to create a diversion for the Cheyenne to escape deeper into the valley, with Lillian (Barbara Hershey) willingly accompanying the them.

Lewis places dynamite at the front of the waterfall cave and Yellow Wolf shoots it with an arrow to blow it up and seal the entrance off.

Lewis and the Sherriff fall into the rapids below, but Lewis saves him (thereby finally earning the Sheriff’s forgiveness for his role in his daughter’s death).

Lillian is never heard from again, but the final moments of the movie indicate that Lewis rejoins her and the Dogmen again in the snowy mountains of Montana some time later. 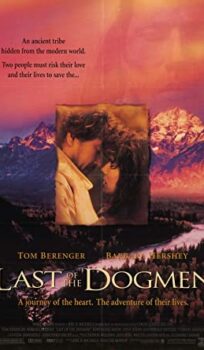