Pooper:
Jules saves Jean from losing his job and then finds Juliette. He reunites the two lovers who are happy to have each other once again.

Long Ending:
The film opens on the wedding between a young girl from a small town named Juliette (Dita Parlo) and Jean (Jean Dasté), the captain of a barge named L’Atalante. Though Juliette’s mother weeps that her daughter will be leaving to live on this barge, Juliette is excited for the adventure Jean promises her. They set off with Jean’s fellow sailors, an older man named La pere Jules (Michel Simon) and Le gosse (Louis Lefebvre). Jules also takes dozens of cats onboard, referring to them as his children.

At first, things go well for all onboard. Juliette tells Jean that before they met, she saw his visage while swimming in water and knew he was fated to be her true love. But the close quarters soon lead to squabbling between the foursome. We also learn that Jean is prone to fits of jealous rage. Just outside of Paris, he finds Juliette spending time in Jules’ room. He flies into a rage and destroys many of Jules’ possessions.

Juliette is excited when they arrive in Paris. Jean promised to take her out to the big city. Instead, Jules gets drunk and feeling that the city is a bad influence on the crew, Jean sails the barge onwards despite never having taken Juliette into the city.

Jean takes Juliette out at their next stop, a town just outside of France. There, a salesman flirts with Juliette. This again causes Jean to lash out in anger and he threatens to keep Juliette confined to their quarters. Juliette sneaks off the barge and buys a train ticket to Paris. Jean soon finds out she has left and demands that they leave without her.

Jean sinks into depression over leaving Juliette behind. Meanwhile, Juliette discovers that Paris is a scary place after she is mugged, ogled and forced to get a job. The pair dream of each other at night. In a depression, Jean jumps into the canal where he sees Juliette’s image under the water. His mourning for his one true love grows even deeper.

Things come to a head when the barge’s owners call Jean to headuarters to reprimand him for his poor performance. Jules takes the blame on Jean’s behalf and after dropping Jean off at the barge, journeys to Paris. He manages to find Juliette and returns with her to the L’Atalante. There, the young lovers embrace, now knowing that their love is true. 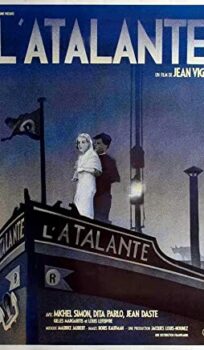