POOPER: (Thanks Gwenhwyvar H!)
Lawrence (Peter O’Toole) helps the Arabs take Damascus as promised, but cannot get the fighting factions to agree on anything. Both the Arab and the English leaders decide they have no more use for him and send him home, an empty man.

This biopic opens with T.E. Lawrence (Peter O’Toole) driving a motorcycle without a helmet. He swerves to avoid some bicyclers, loses control of the motorcycle, and is killed in the ensuing crash. A bust of him is made and placed in a church. A reporter interviews people who knew him – some of whom revere him while others are dismissive of his alleged accomplishments.

The movie flashes back to Lawrence serving as a lieutenant in the British military during World War I. He is stationed in Africa. Although not a good soldier, he is highly educated, merciful, and brave. He is assigned to serve as an advisor to the Arab tribes that live in the desert to convince them to ally with the British against their enemy Turkish forces. As he journeys through the desert to meet Arab leader Prince Faisal (Alec Guinness), he meets a noble warrior named Sherif Ali (Omar Sharif). Sherif is impressed when Lawrence successfully treks the desert on his own to meet Faisal.

Faisal’s people are being attacked and decimated by Turkish forces and their superior firepower. Faisal holds a meeting with Lawrence, Sherif, and British military advisor Col. Brighton (Anthony Quayle) to determine the next steps. Sherif demands the British to supply them with the firepower necessary to compete with the Turks, which will allow the Arabs to remain independent and attack when and where they desire. Brighton insists that the Arab forces journey to cities secured by British Forces where they will essentially serve as a military force under British command and fight for British interests. Although Lawrence backs Sherif, Faisal leans towards joining the British.

Lawrence concocts a plan to take a port city so that the Arabs can be armed without submitting to British authorities. Faisal gives Lawrence permission to lead a small group of soldiers (including Sherif) across the barren Nefud desert to capture a Turkish port. The mission is essentially considered a suicide mission as the Nefud desert is considered uncrossable due to its size and severe weather. Lawrence reasons that due to the desert’s reputation, the Turks will not be guarding the desert side of the port and will therefore be susceptible to a surprise attack by a small force. Sherif joins Lawrence despite being skeptical that it will succeed.

The journey proves extremely dangerous. Lawrence endears himself to the Arab forces after going back into the desert to save one of the soldiers that got lost during a sandstorm. The Arabs and Sherif accept Lawrence as one of their own given his bravery and survival skills. Lawrence also comes to greatly admire the Arabs’ culture and nobility, realizing that the Arabs will give him respect based on his deeds while the British will never truly accept him due to his being born in the lower class.

Lawrence and his forces successfully cross the desert and meet a powerful Arab leader named Auda Abu Tayi (Anthony Quinn). Despite the fact that Auda and Sherif belong to warring tribes, Lawrence convinces Auda to join them in their attack on the port with the promise that he will recover great riches. With Auda’s reinforcements, the Arab forces prevail and capture the port. Lawrence’s reputation amongst the Arabs grows. However, Lawrence is greatly shaken by the bloodshed of war. He even personally executes the man he saved from the Nefud desert in order to keep the Arab forces united after the man murders a fellow soldier from another tribe as part of a blood feud. Auda quickly realizes there is no gold in the port city and becomes enraged. Lawrence promises to travel to Cairo (where the British forces are) and return with gold and additional weapons to continue the fight. Lawrence departs with two outcast orphan teens that he has become the guardian of. As Lawrence and the teens cross the Sinai Desert, one of the boys dies when he falls in quicksand.

Upon arrival, Lawrence has a nervous breakdown and even fights with fellow soldiers when they discriminate against his Arab ward. However, he gets an audience with the commander, General Allenby (Jack Hawkins). Allenby promotes Lawrence to Major and orders him to continue working with the Arab forces. Allenby also promises that the Arabs will be free from direct British oversight and will be armed with heavy artillery. When Lawrence asks Allenby if the British have ulterior motives in the region and intend to take it over when the Turks are defeated, Allenby claims they do not. With that assurance in hand, Lawrence’s spirits are bolstered and he agrees to return. After Lawrence leaves, however, Allenby and his diplomatic advisor Mr. Dryden (Claude Rains) discuss how the British and French likely do intend to take control of the region if victorious (although there are no formal orders to this effect). Allenby also secretly rescinds his order to supply the Arab forces with heavy artillery.

US war reporter named Jackson Bentley (Arthur Kennedy) arrives to cover Lawrence’s efforts in an attempt to garner support for the US’ entry into the war. He finds Lawrence leading a small force of Arabs – including Sherif and Auda. They are blowing up Turkish railways and ransacking the trains. However, many of the Arabs (including Auda) are motivated only by the riches they recover from the raids (such as horses, money, and fine goods) and return home after their monetary desires are satisfied. Lawrence is also shaken after he needs to kill his other ward when the teen is wounded in battle and can’t go on (it’s better to kill a wounded soldier than leave them to Turkish torture). Lawrence’s legend grows after he survives a gunshot wound during a raid. Even Lawrence appears to believe he is invincible and considers himself an Arab. Sherif, his best friend, is one of the few inspired by Lawrence to fight for a greater cause – Arab independence after the war. Bentley’s coverage brings international notoriety to Lawrence’s efforts.

Lawrence’s forces dwindle to a few dozen when he decides to launch an attack on a heavily armed Turkish stronghold. Although warned against going in person as he will be easily discovered, Lawrence decides to scout the stronghold himself. He claims that he will pass as an Arab since he has spent so much time with them. However, he is easily apprehended when the Turkish forces see he is Caucasian. They arrest Lawrence (not knowing who he is, but assuming he must be an enemy). Their leader, Turkish Bey (José Ferrer), subjects Lawrence to brutal torture and leaves him to die. Sherif rescues him and nurses him back to health. But the torture deflates Lawrence’s ego and he decides to return to Cairo and demand a job off the front lines.

When Lawrence arrives in Cairo, he is surprised to find Faisal meeting Allenby and Dryden. Faisal demands to know what plans the British and French have for the region once the war is over, but the pair steadfastly deny any plan is in place. Once Faisal leaves, however, the pair tell Lawrence that the French and British have negotiated an informal agreement to divide the region post-war. The only real way to prevent this is for the Arabs to take the Turkish headquarters located in Damascus, form a government, and assert dominion over the region. Lawrence decides to return to the Arabs and take Damascus before Allenby and the British forces take it. Allenby is genuinely impressed with Lawrence and ambivalent about who eventually controls the region. He agrees to provide Lawrence with the funds necessary to hire soldiers and rebuild the Arab army (although Lawrence notes the best ones, like Sherif, will not need to be paid to fight for their future).

With his forces marshaled once again (including Sherif and Auda), Lawrence leads the Arab army towards Damascus. However, Lawrence has clearly been changed by his experiences. He allows the Arab army to take bloody revenge on a much smaller force of Turkish forces that massacred a town (and even slaughters those trying to surrender himself). Both Sherif and Bentley are disturbed by Lawrence’s lack of mercy and heroism. Nonetheless, Lawrence successfully leads the Arab forces in taking control of Damascus a day before Allenby and the British arrive. They immediately form the Arab National Council and claim the city as under Arab control. Faisal begins a two-day journey to Damascus. Although Allenby orders the British forces to recognize the Council’s authority, he also orders them not to provide any aid to the Arabs.

The Arab National Council is a complete disaster. The members cannot overcome their historic tribal division and proceedings devolve into discord. Combined with a lack of technical knowledge in running a city, Damascus quickly falls into pandemonium. The power fails, fires break out, and hospitals are overrun. The Council essentially disbands. Auda even goads Sherif into succumbing to tribal prejudice to show how impractical the alliance is.

Lawrence returns to the British headquarters in Damascus where he is invited into a meeting with Faisal, Allenby, and Dryden. They are dividing power amongst themselves. Although the British and French will largely run the region, the Arabs will receive limited power under Faisal. In order to ensure no interference with their plans, Allenby promotes Lawrence to Colonel and transfers him to a post in Britain. After Lawrence leaves, both Allenby and Faisal express relief that he will no longer be stationed in Arabia and they can proceed unopposed.

Brighton, aware of the leaders’ machinations and inspired by Lawrence’s efforts, tries to stop Lawrence from leaving. But he is too late as Lawrence is already on a truck out of Damascus. Lawrence searches the Arabs he passes for signs of Sherif, but never finds his friend. The film ends with a dejected Lawrence watching a motorcyclist pass his convoy (foreshadowing his eventual death). 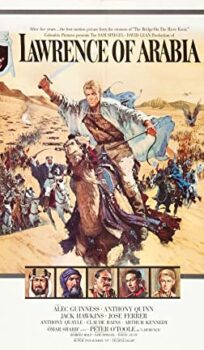