Short Version:
xxxx (Daniel Craig) is shot by Sidney (Ben Wishaw), in front of his girlfriend Tammy (Sienna Miller), just after he’s announced his retirement from the drugs business.

Long Version:
xxxx has to get rid of the stolen Ecstasy pills; he could sell them to Eddie Temple (Michael Gambon) or the Liverpool gang. But the Serbian gang, who had the Ecstasy stolen from them at the start of the film want it back and they want the Duke’s (Jamie Foreman) head for stealing the drugs and have dispatched a notorious hitman, Dragan (Dragan Micanovic) to get the drugs back.. Gene (Colm Meaney) shot the Duke and his girlfriend a while ago and has had him stored in a freezer. xxxx meets with the Dragan and gives him the Duke’s head in a coolbox and tells him, that he’ll get his drugs for him.  xxxx sets up a phoney polie raid, knowing Dragan is watching. The remenants of Duke’s gangs get away and xxxx retrieves the drugs. He then goes to sell them to Eddie Temple as he agreed for £3 million. However Eddie and his gang take the drugs at gunpoint and xxxx only gets a membership to a country club as payment. However, xxxx has gone and sold out Eddie to the gang from Liverpool; they kill Eddie’s men and take the drugs. xxxx sticks to his plan and leaves the drugs business, but is shot dead in front of his girlfriend Tammy (Sienna Miller) by her ex-boyfriend Sidney (Ben Wishaw), 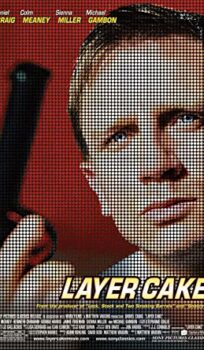