Pooper:
Cecil Gaines (Forest Whitaker) serves as a White House head butler to eight presidents, from Eisenhower to Reagan. His youngest son Charlie is killed in Vietnam. Cecil eventually reconciles with his oldest son, Louis, after years of estrangement. Cecil retires from the White House during the Reagan administration. His wife Gloria (Oprah Winfrey) dies in her eighties. Cecil lives to see Barack Obama become the first African American president and is invited back to the White House to meet with him personally.

Long Version:
Cecil Gaines is born on a Southern cotton farm and after witnessing his father’s murder by the farmer’s son, is invited to become a house boy where he learns serving skills. After he leaves the farm he eventually gets a butler position at a fine Washington DC restaurant where his skills are recognized and he is asked to serve as a White House butler.  Cecil’s wife Gloria (Oprah Winfrey) is a boozy woman who stays home to raise their two sons and she resents Cecil’s White House position because he works long hours and cannot discuss any details about his job.

Their oldest son Louis (David Oyelowo) goes to college in Tennessee and gets involved in the Civil Rights movement – participating in sit-ins and the Freedom Riders movement. He is arrested and beaten over a dozen times but is passionate about the cause. Cecil becomes increasingly upset with his son’s involvement, because it is both dangerous and he can’t see how their efforts will change civil rights in the US.  Cecil and Gloria kick Louis and his girlfriend out one evening after Louis disrespects his father and Cecil spends years estranged from him.

Meanwhile their youngest son Charlie enlists to fight in Vietnam when he turns 18 but is killed and his parents are notified on Cecil’s birthday.  Louis does not show up for the funeral.

Years later, an aging Cecil is invited to a White House dinner by Nancy Reagan but he feels uncomfortable – like he is on display to show that Reagan is a supporter of equal rights even though he refuses to offer aide to Africa to end Apartheid.  Cecil decides to retire after 20 years of service and reconciles with Louis who has taken up protesting for the Apartheid movement.  Gloria dies quietly one morning while the two are getting ready for church and Cecil witnesses the first African American president being elected.  Cecil is invited back to the White House to meet Barack Obama personally. 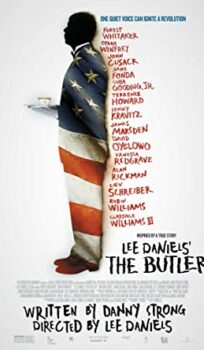