Alice (Charlotte Rampling), the wife of entrepeneur Richard (André Dussollier) shoots herself in the guest bedroom of Richard’s employee, the Engineer Alain (Laurent Lucas) and his wife Bénédicte (Charlotte Gainsbourg). After her death, Bénédicte apparently becomes possessed by the spirit of Alice. She leaves her husband and becomes the lover of Richard, whom Alice hated. After a few days, Bénédicte-Alice gives her husband the key to Richard’s house. At night, Alain successfully strangles Richard while Bénédicte-Alice watches silently. Alain then manipulates the coffee machine to create a time-delayed gas explosion that looks like a suicide. When back at home, Bénédicte remembers nothing.

The MacGuffin lemming found stuck in the S-bend of the kitchen sink at the beginning of the movie was there because of a neighbour kid who had brought the lemming from a Finland vacation, and his angry dad flushed it down the toilet. The lemming is found dead in the basement at the end of the movie, probably because of starvation. 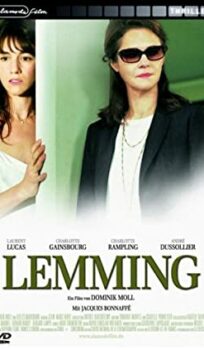