SHORT VERSION:
Rudd eventually orders his chief henchman Vorstedt to kill all of the cops investigating him, and he and his men succeed until only Murtaugh and Riggs are left. Murtaugh fights his would-be assassins at his home and kills them, but some others kidnap Leo, the federal witness against Rudd that he was protecting, and take him to Rudd’s mansion. Vorstedt himself captures Riggs, and before he is about to kill him, he enlightens him to a terrible truth: Back when Riggs worked in the Narcotics Division, he was getting too close to Rudd’s operation, so Rudd put a contract out on him. Vorstedt tried to cash in on it, but he instead killed Riggs’ wife Victoria, revealing that her car accident was no accident. His attempt to do away with Riggs fails, however, and Riggs becomes further enraged when he discovers that Vorstedt has also just killed Rika, Rudd’s liberal-minded secretary whom he was romancing.

Riggs later contacts Murtaugh and tells him that what Rudd and his men have done to him and to the other cops constitutes a declaration of war on the police, so he is putting aside his duties as a cop tonight to seek vengeance, and Murtaugh ultimately opts to join him. They first go to Rudd’s mansion, where Murtaugh saves Leo and Riggs destroys the place, and then they head to the harbor to infiltrate the Alba Varden freighter since they earlier discovered that Rudd and his minions will be using it tomorrow to ship their millions of dollars in drug money back to South Africa. They first find and ruin a large amount of the money, then lay waste to all of his goons, with Riggs fighting and killing Vorstedt himself. He is then shot several times in the back by Rudd from afar, but Murtaugh appears moments later and shoots and kills Rudd. Murtaugh then tends to the still-living Riggs while they wait for their fellow officers to arrive.

LONG VERSION:
In an attempt to bring an end to the investigation of which he is the prime suspect, Rudd (Joss Ackland) orders his chief henchman Vorstedt (Derrick O’Connor) to assassinate all of the police officers investigating the case, and Vorstedt and his men succeed in killing them all until Murtaugh (Danny Glover) and Riggs (Mel Gibson) are left. As Murtaugh is watching Leo (Joe Pesci), Leo makes an offhanded comment about Murtaugh’s boat that spurs him to return home to check out something that might assist in the investigation. He goes there with Leo, and while Leo waits in the car, he checks out an old family video shot on his boat, and he spots a freighter, the Alba Varden, docked nearby. This video clip combined with a note Riggs earlier stole from Rudd’s office makes him realize that Rudd is going to be using that freighter on Thursday to ship money earned from his drug smuggling operation back to South Africa. Meanwhile, two of Rudd’s men commandeer the car and take Leo away, and then two more go into the house to take out Murtaugh, but Murtaugh fights and kills them both. He then goes out and sees his car missing and realizes that Leo has been kidnapped. Also, while Riggs is romancing Rika (Patsy Kensit) (Rudd’s liberal-minded secretary who hates Rudd’s racist views) in his beachfront trailer home, Rudd sends two helicopters full of his goons over to it so they can shoot it up and kill Riggs. Thankfully, Riggs’ dog Sam alerts him and Rika to the oncoming intruders, and they hide beneath the trailer to avoid the gunfire. Riggs sends Rika out to his truck, and when one of the choppers lands and the minions come out and shoot up the trailer some more, Riggs surprises them and kills them all as well as the chopper’s pilot. He then gets in the truck with Rika and Sam and speeds away, pursued by the second chopper, but he soon stops and uses his superior marksmanship skills to kill its pilot and make it crash.

After Riggs takes Rika back to her apartment, he is ambushed at his truck by Vorstedt and clubbed unconscious. He wakes down at the harbor, straitjacketed and chained up and surrounded by Vorstedt and his men. Vorstedt then enlightens him to a terrible truth: Four years ago, back when Riggs was working in the Narcotics Division, he was getting too close to Rudd’s operation, prompting Rudd to put a contract out on him. Vorstedt decided to cash in on it by running Riggs’ car off the road, only to discover afterwards that Riggs’ wife Victoria was the one behind the wheel, proving that her fatal accident was no accident. He then departs, and two henchmen that were left behind throw Riggs into the water to drown him. However, since he is skilled at escaping straitjackets, Riggs wriggles free of it, but then he sees a drowned Rika nearby. He swims to the surface and violently kills the henchmen before getting Rika’s body out.

He telephones Murtaugh at the station and tells him about who killed Rika and Victoria, then says that the villains have made things personal with him and thus he is setting aside his duties as a police officer tonight and going straight to Rudd’s mansion in Beverly Hills to seek vengeance. After Riggs hangs up, Murtaugh puts his badge in his desk drawer and goes after him. He intercepts Riggs on the road leading to the mansion, and Riggs lets him know that he just found out about the other murdered cops and thus considers what Rudd and company did to be a declaration of war on the police. Murtaugh asks if he has a plan, and Riggs tells him to approach the mansion from the front and wait for his signal, then go in and shoot anything that moves. However, Murtaugh informs him that they have Leo, so they need to be careful with that strategy.

As Murtaugh sneaks up to the front door, Riggs wraps a steel cable around one of the house’s support stilts and attaches it to his truck, then starts yanking on it, shaking the whole house. Realizing that this is the signal, Murtaugh shoots all of the henchmen dead and rescues Leo, though Vorstedt escapes, and he and Leo safely get out just as Riggs breaks the stilt and brings the entire mansion crashing down. Murtaugh and Leo then meet up with him, and after Murtaugh tells him that Vorstedt successfully fled, Riggs expresses a desire to find him. Murtaugh thus instructs Leo to take his car back to the police station and wait for the federal marshal, and Leo hugs them both goodbye. As Murtaugh and Riggs drive off in the truck, Murtaugh tells Riggs all about the Alba Varden and how Rudd and his cronies will be departing on it tomorrow.

After they reach the harbor and find the vessel, they knock out a few of the guards and snoop into one of the shipping containers, where they find it loaded with millions of dollars in drug money as well as a car. Rudd and his men discover them and lock them in, intending to keep them there so they will be dead from dehydration by the time they reach South Africa. However, Murtaugh and Riggs turn the car into a bomb and send it exploding out one end of the container as it is hanging over the ship, and just about all of the cash is scattered into the water below. Murtaugh and Riggs then rappel out of the container using ropes and start laying waste to all of the criminals, but Vorstedt surprises Riggs by throwing a knife through his right leg. They then have a brutal fight until Riggs pulls the knife out and drives it into Vorstedt’s abdomen, but Riggs cannot bring himself to finish him off….in that manner. He goes over to a nearby switch and presses it, which sends the still-hanging shipping container down onto Vorstedt and squashes him dead.

Just as Murtaugh finds Riggs, Rudd fires several shots into Riggs’ back from high up on the roof of the bridge, making him fall to the floor. Murtaugh aims his revolver at Rudd and orders him to drop his gun, and Rudd arrogantly flaunts his diplomatic passport in an attempt to remind him that he has diplomatic immunity and is therefore untouchable. However, Murtaugh ignores this and kills Rudd with a single shot to the head. He then heads down to Riggs and finds him still hanging on to life just as police sirens are heard approaching the scene. Riggs asks Murtaugh to get his cigarettes out of his pocket, then tells him to throw them away, having decided to give up smoking. They then lay there and wait to be helped out by their fellow cops. 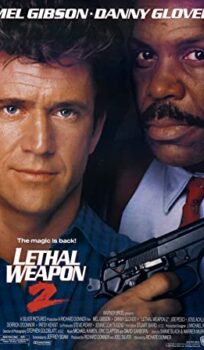