SHORT VERSION:
After Travis – with the aid of his underlings – steals a huge quantity of armor-piercing bullets from a police facility for his arms racket, Murtaugh, Riggs, and Internal Affairs officer Cole track them all down to a housing development project that Travis’ construction company owns, thanks to information they received on it from Leo. They get into a ferocious gun battle with Travis’ goons, during which all of the goons are killed and Riggs pulls a stunt that sets all of the unfinished houses on fire and destroys the ammo.

However, Cole takes several armor-piercing rounds from Travis, and when Riggs goes to check on her, Travis attacks him. They fight across the burning homes until Travis dazes Riggs inside one of them and then jumps into a bulldozer and drives it towards Riggs, intending to kill him with the blade. Thankfully, Murtaugh shows up and tosses Riggs a MAC-10 he brought along that is loaded with armor-piercing bullets he found, and when Riggs fires away at the blade, the bullets punch through it and hit Travis, fatally wounding him and causing him to put the brakes on the bulldozer. After seeing that Travis is still clinging to life, Riggs takes his foot off the brake pedal and sends him into the house, breaking its foundations and causing it to crash down on top of him and finish him off. Riggs returns to Cole and discovers that she is wearing two bulletproof vests and will therefore survive.

Murtaugh decides to postpone his retirement and keep his house, and Riggs and Cole officially begin a relationship.

LONG VERSION:
While busting up a drug deal that he and Riggs (Mel Gibson) come across one afternoon, Murtaugh (Danny Glover) shoots and kills a MAC-10-wielding dealer who engages them. However, he discovers that the dealer is Darryl (Bobby Wynn), a friend of his son Nick (Damon Hines), which leaves him distraught and causes him to go missing from everyone’s radar. After this, Riggs talks to and persuades the Internal Affairs officer, Cole (Rene Russo), to forget about trying to keep things classified and work with him to bring down Travis (Stuart Wilson), and together they realize that he has been using his old cop credentials to access police storage facilities and purloin confiscated guns and armor-piercing ammunition from them. They respond to this by revoking his credentials from the system. They then head to a warehouse that Cole believes is a place where Travis stores his arms shipments, and after battling some goons there, they drive off in a truck with a few crates full of guns that were originally going to be sold by Travis to the mobster Tyrone (Gregory Millar). They head to Cole’s house to rest up afterwards, and they later act upon their growing attraction to one another by getting physical. Meanwhile, Tyrone phones Travis to complain about the loss of his shipment and also tells him that he needs armor-piercing bullets in order to do business, so Travis decides that he and his men must raid another police facility for them.

The next day, Rianne (Traci Wolfe) visits Riggs at his home and tells him that her father failed to come home last night, so he goes out to look for him. He heads to the marina to check out Murtaugh’s boat, and there he finds Murtaugh drinking heavily to try to bury his guilt over Darryl’s death. When Riggs intervenes, Murtaugh attacks him, but Riggs manages to force him to calm down. Murtaugh yells that he hates how he killed a kid, and though Riggs reminds him that that kid was packing heat and he used it on them, Murtaugh accuses him of being cold-hearted since he killed many people in the past without a second thought. Riggs responds by calling him selfish, saying that they are partners and whatever happens to one happens to the other. He then confesses to Murtaugh that he hates that he is retiring because that means he will be retiring their partnership also, and he, his wife Trish (Darlene Love), and his kids are the only family he has and thus that will go away, too. With a level head, Murtaugh apologizes to Riggs for not being more considerate about that, and Riggs tells him that he has slept with Cole and probably shouldn’t have, but Murtaugh doesn’t find this news to be all that terrible.

When Murtaugh, Trish, Nick, Riggs, and Cole go to Darryl’s funeral, Murtaugh tries to apologize to Darryl’s parents. Darryl’s father replies that, if he wants to do something for them, then he needs to find and take down the person who put the gun in their son’s hands. To that end, Murtaugh takes Darryl’s MAC-10 and uses it to track down and furiously confront Tyrone, and after a round of light torture, Tyrone screams that Travis gave him that MAC-10 and also confesses to some other things he knows about Travis, like an auto garage where his henchmen work. Murtaugh, Riggs, and Cole then go to the garage, and after Cole beats the goons virtually single-handedly, they collar all of them except for an unnamed bearded goon, who gets away. After returning to the station, they discover that all of these men were crooks Travis himself arrested back when he was a police officer, and they were all given early paroles and placed on the same work furlough program: Mesa Verde Construction (which Travis owns). When Leo (Joe Pesci) approaches them and asks if he can help them with the case, they have him conduct research on Mesa Verde.

Meanwhile, Travis – after discovering that his credentials have been wiped – has one of his men hack into the LAPD’s computer system to find another arms storage area, and one is found underneath LAPD headquarters. Travis then kidnaps Captain Murphy (Steve Kahan) and forces him to use his credentials to get him and the bearded henchman into the facility. Once they are all in, Travis binds Murphy’s hands behind his back, then has the henchman sneak more of his men inside, and they steal thousands of armor-piercing bullets and take them all down a freight elevator and into an underground subway passage, where they load them onto a truck that was earlier parked there. Meanwhile, Cole discovers evidence of the hacking, so she, Murtaugh, and Riggs head down into the facility, along with Edwards (Jason Rainwater), a greenhorn cop who idolizes Murtaugh and Riggs. They halt Travis and company and have a gunfight with them, and though Murphy is able to get free and almost all of Travis’ goons are killed, Travis shoots and kills Edwards with an armor-piercing round and then drives off in the truck. Riggs give chase through the city streets, first on foot and then on a police motorcycle, with Murtaugh trailing behind, but Travis is able to get away while Riggs ends up crashing in a freeway construction site.

Murtaugh catches up to Riggs, and then Leo appears before them, having tracked them down with a police scanner, and informs them that Mesa Verde has a housing project, Rancho Arroyo, that is currently being constructed. Murtaugh and Riggs immediately drive over there, but not before shooting out two of the tires on Leo’s car when he wishes to come with them. They arrive outside Rancho Arroyo after nightfall, and Murtaugh is toting the MAC-10, having saved it for this very occasion. They soon get surprised by Cole, who followed them here after Leo talked with her about Mesa Verde first, and they all get into a ferocious gun battle with Travis’ goons, during which all of them gradually get eliminated and Riggs pulls a stunt with the truck carrying the ammo that sets all of the unfinished houses on fire and destroys both the truck and the ammo. However, Cole suddenly takes several armor-piercing rounds from Travis, and when Riggs goes to check on her, Travis jumps him from behind. Riggs gets free and pursues him, and Murtaugh finds a box containing armor-piercing bullets and loads them into the MAC-10. After a short chase, Travis dazes Riggs inside one of the houses and then hops into a bulldozer and drives towards Riggs, intending to kill him with the blade. However, Murtaugh soon tosses Riggs the MAC-10 and tells him of what it contains, and when Riggs fires away at the blade, the bullets punch through it and hit Travis, fatally wounding him and causing him to put the brakes on the bulldozer. After seeing that Travis is clinging to life, Riggs takes Travis’ foot off the brake pedal and makes the bulldozer keep driving right into the burning house, breaking the foundations and sending the house crashing down onto Travis and finishing him off. Riggs then tends to Cole, and to his relief, he finds out that she is wearing two bulletproof vests and will therefore survive. When the paramedics and fire department get called in, Cole is loaded into a chopper bound for the hospital, but before she goes, Riggs tells her he loves her.

A few days later, Murtaugh is taking a bath at home when he gets interrupted by his family, who are ready to celebrate his retirement with him. However, he tells them that he has decided to postpone retirement, and his family supports his decision. Leo then comes in and says that he has just found a buyer for his house and needs his signature on the papers to make it official, but Murtaugh informs him that he has changed his mind about selling the house, too. He later meets Riggs outside to report for work again, and as they motor away, Riggs mentions that he and Cole are in a relationship and he will be picking her up at the hospital this afternoon. 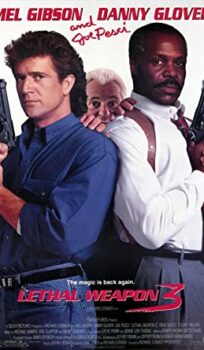