Abraham Lincoln (Daniel Day-Lewis) wants to pass the 13th Amendment abolishing slavery before the end of the Civil War. He fears if the war ends before the amendment is passes, that the Emancipation Proclamation will be invalidated by the courts as a presidential action during war which will not apply once the slave holding states rejoin the Union. The Senate has passed the amendment, the House of Representatives with many recently defeated representatives finishing out their terms, will probably not pass the amendment. The Secretary of State William Seward (David Strathairn) hires the “Gang of Three” W.N. Bilbo (James Spader), Richard Schell (Tim Blake Nelson), and Robert Latham (John Hawkes) to offer federal jobs to get the representatives to change their votes. Representative Thaddeus Stevens (Tommy Lee Jones) of Pennsylvania who is an abolitionist also pushes other representatives to vote for the amendment.

Meanwhile, the Confederate Vice-President Alexander Stephens (Jackie Earle Haley) tries to travel north to have peace talks, but is delayed on Lincoln’s orders until after the vote. At home, Lincoln and his wife Mary (Sally Field) argue when oldest son Robert (Joseph Gordon-Levitt) wants to enlist in the Army before the end of the war.

After the 13th Amendment abolishing slavery is passed by the House of Representatives, Representative Thaddeus Stevens (Tommy Lee Jones) of Pennsylvania takes the actual document home with him overnight. He comes home and is met by his housekeeper, a widow, Mrs. Lydia Hamilton Smith (S. Epatha Merkerson) who is black. You later see them in bed together with Lydia reading the amendment to Rep. Stevens. [According to numerous biographies and references, Stevens had a 23 year relationship with Mrs. Lydia Harris, and neighbors in Pennsylvania referred to her as Mrs. Stevens and considered her his common law wife.]

(The Confederates lose the war, and Lincoln is assassinated.) 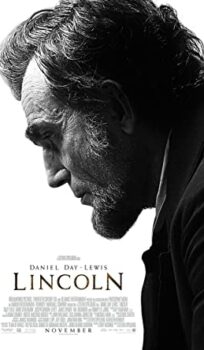