SHORT VERSION:
Lyon defeats the unbeaten Attila in the last fight of the film despite being hindered by a broken rib, winning a hefty chunk of change for Helene and Nicole both from the fight and from a bet he earlier placed on himself to win. Cynthia, on the other hand, finds herself owing the bookies an enormous amount of money because she skewed the odds to make Attila look like a bad fighter and then placed a huge bet on him, thinking that Attila would win easily and she could rake in a tidy sum. She tries to flee the mansion that was hosting the fight, but she finds that her limousine is blocked in by other cars. The Legionnaires Hartog and Moustafa commend Lyon on his performance and assure him that his sister-in-law and niece will be alright now, then they take him towards their car with Joshua following them. Outside, Lyon and Cynthia look at each other one last time before Hartog and Moustafa continue to escort Lyon away, and the bookies catch Cynthia and bring her back inside the mansion to discuss her unsecured marker.

Hartog and Moustafa take Lyon back to Helene’s place so he can dress his wounds from the fight and say goodbye to her and Nicole, and he also tells Joshua to look after them. However, shortly after the Legionnaires drive off with Lyon from the house, they stop the car just after turning a corner at the end of the street and tell Lyon that they are letting him go, having seen that his family needs him, and they wish him good luck. He runs back up the street towards Helene, Nicole, and Joshua and embraces them.

LONG VERSION:
As Lyon (Jean-Claude Van Damme) scores a string of victories on the street fighting circuit, he gives most of the money he earns to Helene (Lisa Pelikan) and Nicole (Ashley Johnson) under the guise of monthly checks from a hitherto-unknown insurance policy that his brother Francois (Jason Adams) had, which are delivered to them by Joshua (Harrison Page) posing as an insurance agent (Helene initially refused any help from Lyon, unjustly blaming him for putting Francois on the path that led to his demise). This saves Helene and Nicole from homelessness and also pays off the medical bills that Francois had accumulated before his death. However, one day, as Lyon watches Nicole from afar enjoying a new bicycle in front of her apartment building that she got with the money, he is spotted from a nearby building by Hartog (Voyo Goric), a Legionnaire who – along with Moustafa (Michel Qissi) – has been charged with finding Lyon and taking him back to Djibouti for court-martial and has been staking out the apartment building, knowing that Lyon would show up there sooner or later. He and Moustafa run out into the street and start looking for him, attracting the attention of Helene, who had stepped outside to check on Nicole. The Legionnaires fail to catch Lyon, but Hartog confidently remarks that he will be back.

Sure enough, Lyon stops by the apartment’s exterior again the following day and has a chat with Nicole (who doesn’t know that Lyon is her uncle), and Helene sees him from afar. Nicole then points out Hartog and Moustafa standing nearby, so Lyon tells her to go home, after which she is picked up by Helene and brought inside. Hartog informs Lyon that he and Moustafa have been ordered to bring him back to Djibouti by any means necessary, but Lyon refuses to come along and is forced into fighting them, sustaining a broken rib in the process. He manages to get away from them as well as approaching cop cars when Cynthia’s (Deborah Rennard) assistant Russell (Brian Thompson) – who was told by Cynthia to spy on him and Joshua – drives up near him in his car and has him ride with him. Lyon is taken to a hospital to get looked at and gets confirmation from a doctor that he has a broken rib, but he bribes the doctor to keep it a secret, for he has a big fight coming up next week that will result in a huge payday that he can use to give Helene and Nicole a more comfortable life. As he is leaving, he finds that Cynthia has come here looking for him, and he soon talks to her and tells her that he needs her help.

That night, Joshua shows up at Helene’s apartment door, and he tells her that he knows about what happened earlier today and that she and Nicole need to leave this place now. When she asks him how he knows about what transpired, Joshua has Lyon come in from the hallway. Joshua then points out Lyon’s bruised and cut knuckles to Helene and informs her that he has been partaking in fights to earn the money that she has been getting, so she owes him a minute of her time to say what he has to say. Helene decides to listen, so Lyon tells her that the men she saw had followed him from North Africa and knew he would come see her, and he is not here to cause her any problems, but to help her, and he needs her to trust him. Accepting that Lyon only means well, Helene officially introduces Nicole to her uncle, essentially welcoming his and Joshua’s aid. She and Nicole then move into the larger apartment that Lyon and Joshua have been living in. Meanwhile, Cynthia and Russell meet with Hartog and Moustafa and watch a video showcasing Lyon’s upcoming opponent, Attila (Abdel Qissi), a brutal foreign fighter that is currently undefeated and has actually killed eight of his opponents. After the video concludes, Cynthia tells the Legionnaires that the impending fight is the reason why they can’t have Lyon just yet; it is already scheduled, and if the French consulate or the immigration office gets involved, it will screw up everything. Fully believing that Attila will crush Lyon, she tells them that she will gladly hand over Lyon to them once Attila is victorious, and the duo agree to this arrangement on the condition that they get to watch the fight themselves.

The following night, Cynthia and Russell collect Lyon and Joshua and take them to a party at a mansion that has several of Cynthia’s wealthy friends in attendance. Along the way, they tell Lyon and Joshua that, because those same wealthy friends are looking to bet some serious money on tomorrow’s fight, the money they all stand to make could set them up for life. While they are at the party, Cynthia plays the tape of Attila for the prospective bettors (who already saw a tape of Lyon in action before he arrived), but she has tampered with it to make Attila look like he isn’t that great of a fighter, intending to skew the odds so she can place a huge bet on Attila and really clean up financially when he wins. The next day, Lyon lets Helene know that, if he wins tonight’s fight, he is going to make some heavy money, and he wants to use it to take her and Nicole away from Los Angeles and make a fresh start somewhere else.

Later, as Lyon is preparing for the match (which is being held on the grounds of the same mansion he was at yesterday) in a quiet room, Joshua enters and soon discovers his injured rib, and Lyon tells him that he took all of his money out of the bank and placed it all on a bet on himself to win. Joshua yells that $12 million is circling around this fight, and then he brings up how he discovered that Attila has killed some of his past opponents. He asks Lyon how he can expect to beat Attila when he isn’t at 100% and then asks if he wants to end up crippled like him (though it is never explicitly stated, Joshua was once a fighter for Cynthia himself, but his career ended when she got him into a fight that resulted in him sustaining the injury to his leg that left him with his permanent limp) and spend the rest of his days running $5 fights for winos and junkies. Lyon tells him that he is doing this fight to take him, Helene, and Nicole away from this dirty business, and he will also take Cynthia away from it if she wants to, but Joshua reminds him that Cynthia doesn’t give a damn about him. After Lyon states that he is going to win the fight and asks Joshua to trust him, Joshua goes out and meets with Cynthia and manages to get her to reveal that she is betting on Attila, so he goes over to the betting desk and puts money down on him as well. When Lyon arrives inside the tented area where the fight is taking place, he notices Hartog and Moustafa in the crowd.

A short time after the fight commences, Attila discovers Lyon’s broken rib, so he takes advantage of it and soon dominates Lyon. In a break from the combat, Joshua begs Lyon to stay down, but Lyon tells him that he is more than sure that Cynthia bet against him. After he takes some more heavy hits from Attila, Joshua admits to him that he had bet against him as well and will split the profits with him if he just forfeits, to which Lyon angrily glares at him and says, “wrong bet”. He gets up with renewed energy and proceeds to pummel Attila until he is bloody and on his back in the bleachers, but despite an initial temptation to kill him, Lyon reminds himself that he is not that kind of person and stays his hand. Hartog and Moustafa – who became supportive of Lyon during the fight after being impressed with his courage and performance – then approach Lyon, and Moustafa commends him for having a great fight and assures him that his family will be alright now, then he and Hartog start to take him towards their car. They first bring him up to Joshua, who tells him that he has heart and advises him to never lose it because he will never get it back, and Lyon hugs him, basically forgiving him for what he did. Meanwhile, Cynthia tries to flee without paying her enormous debt to the bookies, but she finds her limousine blocked in by other cars. She and Lyon cast one last look at each other before Hartog and Moustafa continue to escort Lyon away with Joshua following them, and then the bookies catch up to Cynthia and bring her back inside the mansion to discuss her unsecured marker.

While Joshua, Hartog, and Moustafa wait outside, Lyon enters his apartment to find Helene and Nicole all ready to leave Los Angeles behind, but Lyon tells them that they are going to have to go on without him, which Nicole tearfully protests. After dressing his wounds from the fight, Lyon says goodbye to his family and Joshua, and he tells Joshua to look after them. Hartog and Moustafa put him in their car and start driving away, but shortly after they turn a corner at the end of the street, they – having accepted that Lyon’s family really needs him – stop the car and tell him to get out, and they also wish him good luck. He runs back up the street to the apartment, where he happily embraces his loved ones. 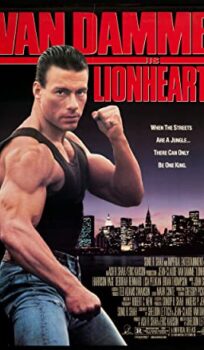