It turns out that the villain (Timothy Olyphant) is giving the “illusion” of a fire sale when in fact he’s robbing the very system he created, gathering social security numbers and bank account information for his own needs.  John McClane (Bruce Willis) catches onto this, thanks to the help of a newfound hacker buddy (Justin Long) and his friend, the Warlock (Kevin Smith).

McClane dispatches of thugs by way of gunfire, neck breaking on the stairs, and cleverly taking care of one foe via shredding unit.  He eventually hijacks a truck and chases after Olyphant and the gang, only to run into an F5 false commanded to attack him.  McClane survives the attack, forcing the jet pilot to eject and watching his plane burst into flames.  He then chases after Olyphant and the gang, eventually shooting them all and even shooting himself to bring down the main bad guy (along with the eventual “Yippie ki yay” line, nicely done.

At the end of the film, McClane’s daughter (who was kidnapped midway through) and the hacker exchange worries about each other through him, and they all head off to the hospital in one piece. 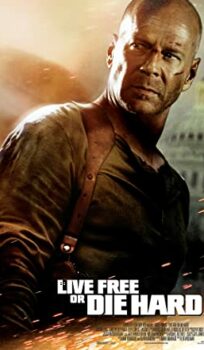