SHORT VERSION:
Brad is killed.  After the show, Katy is killed by a crazed fan.  Live! is a huge hit and becomes an annual event.  Rex becomes the new producer of Live!

LONG VERSION:
Katy Courbet (Eva Mendes) is the new head of programming for the fictional TV network ABN, and she has just come up with an idea to boost the ratings of the fledgling network.  She wants to create a reality game show called Live!, where the contestants play Russian Roulette with a real gun and bullets, with a prize of $5 million dollars to the winner.  The TV executives are constantly telling her that Live! would never air because the FCC won’t allow it and no advertiser would buy airtime for it, but Katy is relentless in her plan for getting the show on the air.  She convinces the heads of the network to green light the production, and she also convinces the network’s lead attorney (Andre Braugher) to petition the FCC to allow the show to air.  She even convinces the various network sponsors to commit to buying ad time, which she says will rival the Super Bowl in cost.  While all this is going on, Katy is being followed by a documentary film crew, and Rex (the producer of the film) and Katy are falling for each other.

Katy proceeds to cast the contestants for Live!, and six are selected in a national search.  They are Jewel (Katie Cassidy), a young actress trying to find her big break; Brad (Eric Lively), an extreme sports enthusiast; Rick (Jeffrey Dean Morgan), a down-on-his-luck farmer who is facing foreclosure due to his child’s medical bills; Abalone (Monet Mazur), a former model turned performance artist; Byron (Rob Brown), a struggling writer; and Pablo (Jay Hernandez), a poor gay Mexican trying to get himself and his mother out of the barrio.  The six are shown in advertisements everywhere, and everyone is talking about the show, even though it hasn’t been approved to begin production.  With all of the attention the show is getting, the executives finally green light the production, and the FCC rules that Live! can air, but it must run at 1AM.  Even Rex and the film crew get involved in the show when Katy hires them to make the “up close and personal” segments for each contestant.

Prior to production, the rules are ironed out.  There will be a single bullet and 5 blanks loaded into a .357, and each of the survivors will win $5 million while the family of the loser will receive nothing.  After the bullet and blanks are loaded, the chamber will be spun once, and the order of who shoots will be determined by a lottery.  If someone dies before everyone can shoot, the remaining players will get the money as well.  As show time nears, Katy learns that the ad time is going for nearly $2.5 million for 30 seconds, and the share (the percentage of televisions turned onto that program) was above 50, which is at the level of Super Bowls and the last episode of Seinfeld.

The show begins, and Jewel is selected first.  She pulls the trigger and it’s a blank.  She is given a $5 million check by the host and walks off the set.  Pablo is next, and it’s a blank for him as well.  After he gets his check, Abalone is selected.  She uses her moment to do a performance where she pretends to snap and threatens to kill the host, but she eventually turns the gun on herself and it’s a blank.  She gets her check and Byron is next.  He’s safe and $5 million richer.  Brad is selected to go next, followed by Rick.  Brad pulls the trigger and is killed.  A distraught Rick takes his check and cries as he hugs his wife.

After the show, the reality of the situation finally hits Katy and she throws up.  Rex pleads with Katy to quit the television business and they can start a life together as filmmakers.  Despite her feelings, she refuses, claiming that Live! is the future of television and she wants to be a part of it.  During a post-show interview, a crazed man comes up and shoots Katy several times.  Rex holds her and tells her he loves her as she dies.  The movie ends one year later.  Live! is a huge hit, and it is now an annual event.  Rex, the documentary film producer, is now the producer of Live! 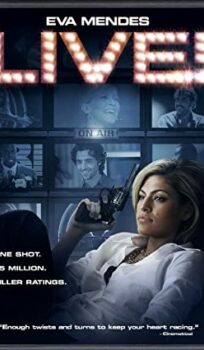